Scientists at NASA detected light emerging from the collision of two black holes. The discovery could be significant in unravelling the mysteries of the cosmos. 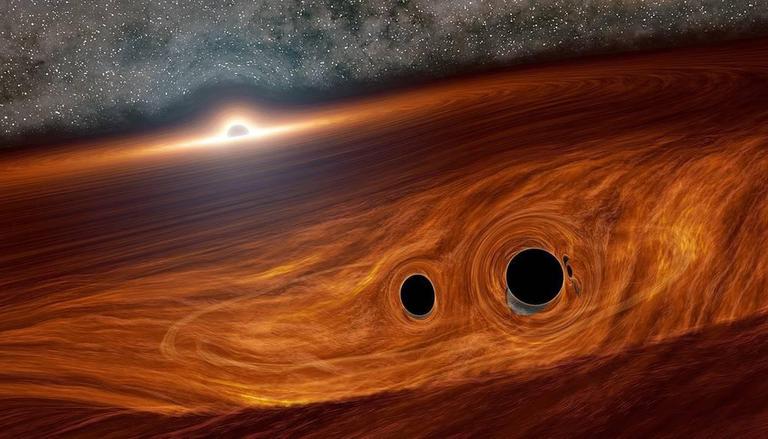 
In what could be a ground-breaking discovery, scientists at the US National Aeronautics and Space Administration (NASA) have detected light emerging from the collision of two black holes. This is being considered significant as black holes are entities that do not allow anything to escape, not even light, due to their immense gravity.

According to NASA, this discovery could provide scientists with opportunities to learn more about black holes as their existence in the universe has largely remained mysterious.

When black holes collide, they could cause nearby material to radiate with light. A 2020 study made the first-ever observation of a flare that may have been produced when two smaller black holes merged to form a new, larger black hole: https://t.co/ign9NtsXc2#BlackHoleFriday pic.twitter.com/lRmUEe4bBB

What is a black hole?

Scientists have been after this mysterious entity as its features are highly intriguing. Formed after the collapse of a star, black holes are astronomical objects with the strongest gravitational pull in the known universe.

According to the administration, the said merger of the two black holes was first identified in May 2019, by the Laser Interferometer Gravitational-wave Observatory (LIGO) and the European Virgo detector gravitational wave detectors. Explaining the phenomenon of black hole mergers, NASA said in its report:

"When two black holes spiral around each other and ultimately collide, they send out gravitational waves - ripples in space and time that can be detected with extremely sensitive instruments on Earth. Since black holes and black hole mergers are completely dark, these events are invisible to telescopes and other light-detecting instruments used by astronomers."

Now with this discovery, scientists are producing theories that suggest that light signals can be produced by the merger of black holes as they radiate the materials nearby.

The discovery that was made using the Caltech's Zwicky Transient Facility (ZTF) located at Palomar Observatory, will be the first light flare from a pair of colliding black holes if scientists are able to confirm the aforementioned theory. The agency states that scientists were able to look for light signals from the original location of the gravitational wave signals. Apart from this, mergers between dense cosmic objects called neutron stars have also been spotted along with the identification of light emissions from those collisions.