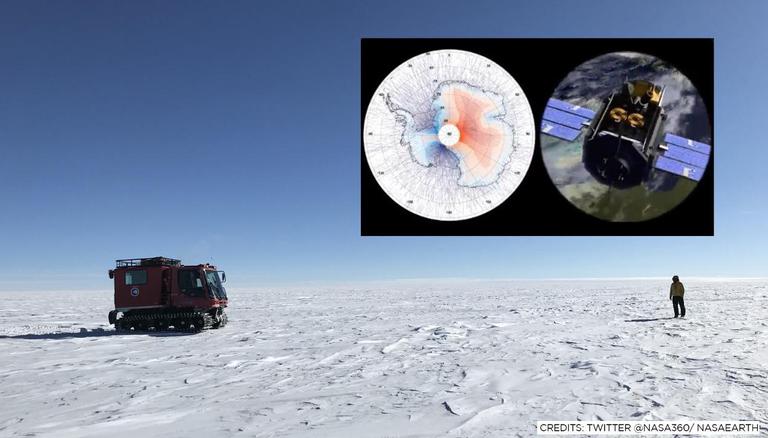 
With the help of an advanced Earth-observing laser instrument, NASA scientists discovered two active subglacial lakes under the Antarctic ice sheet. According to a blog, glaciologist Helen Amanda Fricker back in 2007 had found that beneath the thousands of metres thick Antarctic ice-shelves lies a whole hidden network of interconnected lakes that actively fill and drain. The presence of meltwater beneath the ice sheets was known to scientists, however, now, such a network with an active water system was a breakthrough.

“The discovery of these interconnected systems of lakes at the ice-bed interface that are moving water around, with all these impacts on glaciology, microbiology, and oceanography—that was a big discovery from the ICESat mission,” said Matthew Siegfried, assistant professor of geophysics at Colorado School of Mines, Golden, Colo. and lead investigator in the new study.

Siegfried added, “ICESat-2 is like putting on your glasses after using ICESat, the data are such high precision that we can really start to map out the lake boundaries on the surface”.

Hidden deep below Antarctica’s thick sheet of ice, lakes of meltwater form and drain water into the ocean. Using @NASA’s #ICESat2 satellite, researchers have improved maps of these hidden lakes under West Antarctica, and even discovered two more. https://t.co/odUaaBbsfQ pic.twitter.com/rAwpE4f6Wq

According to the blog, these maps will now help scientists understand the water system in Antarctica and how these glacial lakes contribute to the ocean water. Using the measurements, they can explain and predict the appearance and disappearance of Antarctic lakes. Scientists can also calculate how much of this is caused by global warming and how these lakes are affecting the movement of Antarctic glaciers.

Risk of hydrofracturing could increase

NASA explained that how slow or fast the Antarctic ice sheet moves depends upon these meltwater lakes which are lubricating it. The scientists said that the movement happens slowly outwards from the central region. But when it approaches the Southern Ocean, the movement speeds up by a few metres. During this movement, the ice sheets suffer cracking, crevassing and other changes, which are all measured using space lasers, thanks to ICESat-2, scientists said.

“These are processes that are going on under Antarctica that we wouldn't have a clue about if we didn't have satellite data,” Fricker said, emphasizing how her 2007 discovery enabled glaciologists to confirm Antarctica’s hidden plumbing system transports water much more rapidly than previously thought. “We've been struggling with getting good predictions about the future of Antarctica, and instruments like ICESat-2 are helping us observe at the process scale”.

Scientists think that understanding the nature of meltwater lakes and other changes happening in ice sheets can help them understand the fate of Antarctica and guide them about how global warming is affecting the ice sheet. They also noted that meltwater lakes and streams on Antarctica’s ice shelves are common during the warmer months. And because scientists expect these meltwater lakes to be more common as air temperatures warm, the risk of hydrofracturing could also increase in the coming decades.