The tiny satellites meant for specific purposes will lift off from the Vandenberg Space Force Base upon a United Launch Alliance Atlas V rocket at 11:42 pm. 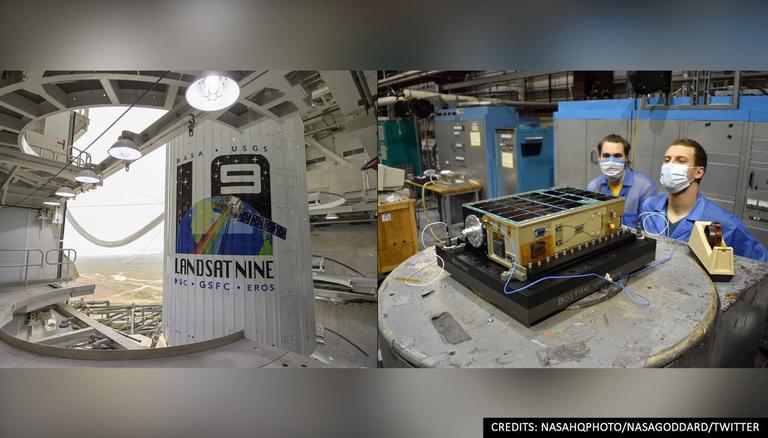 
NASA’s Landsat-9 Earth-observing satellite, which is ready for launch on September 27, will be accompanied by two CubeSats- ‘CUTE’ and CuPID’. The tiny satellites meant for specific purposes will lift off from the Vandenberg Space Force Base upon a United Launch Alliance Atlas V rocket at 2:12 pm EDT (11:42 pm IST). The Landsat-9  is the continuation of a series of Earth-observing spacecraft stretching back to almost 50 years, said a press release.

L-1 for the scheduled #Landsat 9 launch on a @ULALaunch Atlas V rocket from Vandenberg Space Force Base in California! Landsat 9 will continue a nearly 50-year legacy of observing Earth's landscapes and coastal regions. More: https://t.co/PvP7MA6S21 pic.twitter.com/blVVNhoASI

Short for the Colorado Ultraviolet Transit Experiment, this cereal box-sized satellite has been built to explore the exoplanets i.e the planets residing outside our solar system. As per a report by The Science Times, the CubeSat was prepared at a cost of $4 million. Researcher Kevin France, from CU Boulder Laboratory for Atmospheric and Space Physics (LASP), said that the satellite is no bigger than a box of cheerios.

Although being launched under the Landsat-9, CUTE’s goal will be to study the extremely hot exoplanets that reside light-years away from the Earth. Media sources reported that once the CubeSat exits Earth’s orbit, it will look for the class of exoplanets called “hot Jupiter” which are extremely hot and gaseous with massive size. CUTE will reportedly collect data from other solar systems for two and a half years and will be tracked by scientists at CU's Laboratory for Atmospheric and Space Physics.

READ | NASA, Boeing assist Russia in probing to find cause of cracks in ISS module

For nearly 50 years, NASA and @USGS have been working together to observe and understand our changing Earth through the collaborative Landsat Program.

Learn more about the latest satellite, #Landsat 9, before it lifts off on Monday, Sept. 27: https://t.co/BUc1Z7PnYb pic.twitter.com/rySNjuXUn3

What is NASA's Landsat programme?

This programme is a joint effort by NASA and the US Geological Survey that has provided constant imagery of Earth since 1972. The Earth-observation satellite can image the Earth across 11 spectral bands and resolve objects down to about 15 meters wide with its high-resolution camera and a sensitive infrared sensor. Designed to last at least 5 years in orbit, it will replace the ageing Landsat 7, which is still being used.