In its search for traces of life on the Red Planet, NASA Mars rover Curiosity captured a ‘dust devil’ swirling through Gale Crater. Curiosity photographed the dust devil on August 9, after it spotted a faint dust of seemingly dangerous vortices whirling between dark and light slopes on a 96-mile-wide (154 kilometers)  site located on the equator of Mars. The US space agency released the video on its official Instagram handle with a caption, “Our Curiosity rover spots a “dust devil” on Mars,” adding, “Right now, it's the “windy season” in the region where our Curiosity rover is operating.”

According to NASA, Mars is a dynamic planet, due to its unique atmospheric interaction with the surface. And on August 9, NASA’s rover captured a spinning, columnar vortex of wind known as a "dust devil" moving across its landscape. “This dust devil appears to be passing through small hills just above Curiosity's present location on Mount Sharp, a peak within Gale Crater,” NASA informed, adding, “The dust devil is approximately one-third to a half-mile (half-a-kilometer to a kilometer) away, and estimated to be about 16 feet (5 meters) wide.” In the raw monochrome rover footage, the typically faint dust plume of a dry whirlwind can be seen arising on the Maritan surface in the area that is previously documented by NASA as potentially habitable with a network of the lake-and-stream system. 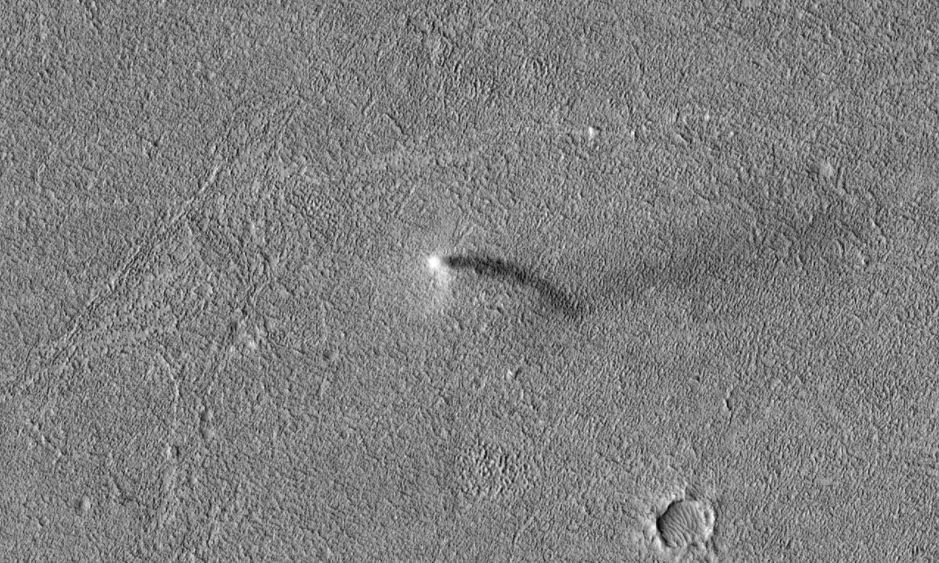 Read: Sun Has Started A New Solar Weather Cycle & It Should Be Pretty Calm, NASA Predicts

Claire Newman, an atmospheric scientist at the Arizona-based company Aeolis Research, wrote in an update on the mission that on Mars, “it’s almost summer on Gale Crater, a period of strong surface heating that lasts from early spring through mid-summer.”

The dust plume was witnessed near Mount Sharp, Gale’s central peak, which rises 3 miles (5 kilometers) above the crater floor. The region is located between the Mars’ flat northern lowlands and the heavily cratered southern hemisphere, according to NASA. Rover’s assigned task after its landing on the floor of Gale Crater was to investigate clays, sulfates, and minerals that form in the presence of water. However, the rover spotted something unique and never before seen on the stretch.  Internet users called the footage as “surreal”. A user pointed out that “Water can be produced where there is air. This is super.”

"There are several HiRise images of tracks left behind by dust devils, but it is rare to catch one in motion," wrote MRO team member Sharon Wilson said in an update.

Read: NASA's Hubble Snaps Pictures Of Stars Orbiting Closely To One Another Like Swarm Of Bees

WE RECOMMEND
1 week ago
NASA shares footage of 16 metre wide 'dust devil' spinning on the martian surface
5 days ago
Sun has started a new solar weather cycle & it should be pretty calm, NASA predicts
1 week ago
NASA's Hubble snaps pictures of stars orbiting closely to one another like swarm of bees
1 week ago
NASA launched first ever Mercury spacecraft Atlas 4 (MA-4) on this day in 1961
1 week ago
NASA wants a piece of Moon; asks contractors to retrieve Lunar Regolith above 50gm