Scientists observed the obliteration of star and its eventual death by “spaghettification" from telescopes at the European Southern Observatory in Chile.

Astronomers have found a supermassive black hole consuming a star by a way of turing it into a ‘stellar spaghetti’ in a rare tidal disruption event that occurred approximately 215 million light-years away in the Eridanus constellation’s spiral galaxy. Observed from telescopes at the European Southern Observatory in Chile, the obliteration of star and its eventual death by “spaghettification" was documented in research by astronomers at the Zwicky Transient Facility in Monthly Notices of the Royal Astronomical Society.

In what is being called the closest ever recorded proximity of a star towards the supermassive black hole, the stellar object is seen ripped into thin streams of material, ejecting vibrant energy flares due to blackholes’ extreme gravitational pull. The event created enormous dust and debris as the star was consumed. “When a black hole devours a star, it can launch a powerful blast of material outwards that obstructs our view,” Samantha Oates, one of the researchers at the University of Birmingham explained in the study. “This happens because the energy released as the black hole eats up stellar material propels the star’s debris outwards,” she added.

A team of scientists observed the burst of flares termed AT2019qiz astronomers using the European Southern Observatory’s Very Large Telescope and New Technology Telescope, the Las Cumbres Observatory global telescope network, and the Neil Gehrels Swift Satellite. The scientists watched this flare get denser and bigger over the course of six-months. Eventually, it faded after the total consumption of the star.

Death by spaghettification: artistic animation of star being sucked in by a black hole

“The idea of a black hole ‘sucking in’ a nearby star sounds like science fiction. But this is exactly what happens in a tidal disruption event,” lead author Dr. Matt Nicholl, a lecturer and Royal Astronomical Society research fellow at the University of Birmingham said.

“We were able to investigate in detail what happens when a star is eaten by such a monster.” 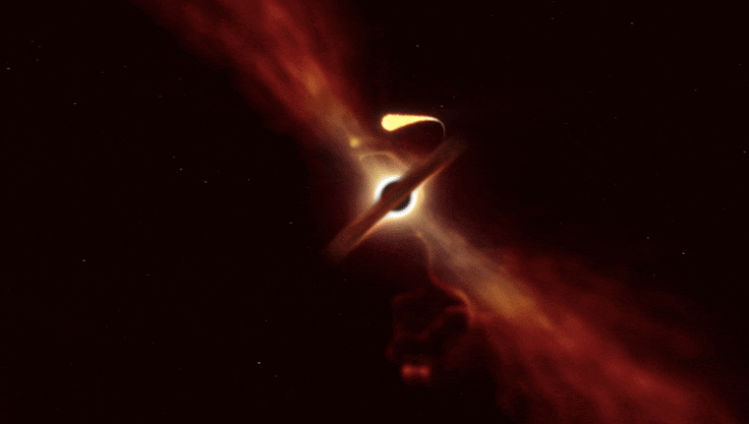 [Star experiencing spaghettification as it’s sucked in by a supermassive black hole during a ‘tidal disruption event’ captured on ESO’s Very Large Telescope and ESO’s New Technology Telescope. A team of astronomers found that when a black hole devours a star, it can launch a powerful blast of material outwards. Credit: ESO/M. Kornmesser] 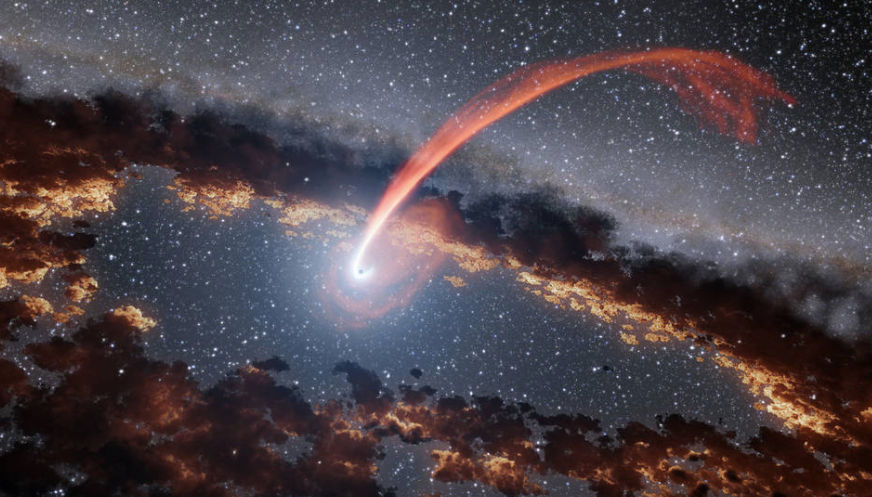 [This illustration shows a glowing stream of material from a star, disrupted as it was being devoured by a supermassive black hole. Credit: NASA]

An ESO Fellow Thomas Wevers in Santiago, Chile, who was at the Institute of Astronomy, University of Cambridge, UK, when the phenomenon was observed revealed in the study that the bright light produced stirred the scientists and immediately, they pointed ground-based and space telescopes in that direction. “Several sky surveys discovered emission from the new tidal disruption event very quickly after the star was ripped apart,” he said. The ultraviolet, optical, X-ray, and radio light observed on telescopes showed a direct connection between the ejections out of the star and the flare emitted as it was devoured by the supermassive black holes.

Read: 3 Asteroids Are Heading Towards Earth; NASA Reveals How Close The Approach Will Be