A mysterious object has crashed from the space to land directly in Navajo Nation, a scarcely populated area in the United States. Nobody has been hurt

A mysterious object crashed from space to land in Navajo Nation, a scarcely populated area in the United States. The bewildering incident took place on November 18, wherein the grey coloured object crashed in Dennehotso, a community reservation area of Arizona. Although nobody was hurt, the celestial accident has created a stir on the internet.

Describing the incident to The Arizona Republic, Tully Begay, Vice President of tribe’s Dennehotso Chapter, said that the object landed 1,200 from his home. Luckily, he was in Tuba city at that the time. Later, the Navajo Police Department confirmed that officers responded to the area after receiving reports about an object that “fell from the sky”.

A photograph of the object was also shared on Facebook by Navajo Nation Council  Delegate Nate Brown. In the picture, the grey coloured satellite could be seen lying on a visibly arid land. In addendum, an orange coloured object, probably a parachute could be seen lying in the vicinity. In the caption, Brown mentioned that a police investigation into the crash was currently ongoing.

Meanwhile, the photo has caught the attention of many in the internet and has been shared nearly 700 times. In addendum, aghast netizens from across the world have flocked together to comment on the ‘out-of-the-world’ crash. “We’re the tribe that shot down Donald Trump space force,” jokes a resident of Navajo Nation. “Space colonizers trashing our rez. I’m emailing Elon Musk,” quipped another.“Maybe our internet service will get better now. Lol!,” joked another. 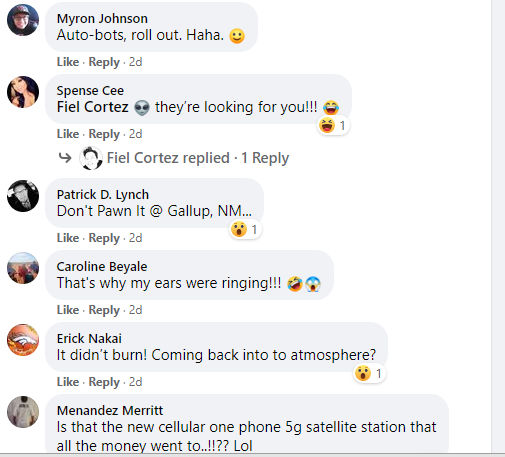