Jeff Bezos' Blue Origin is all set for its second crewed spaceflight that will carry four civilians including 'Star Trek' fame actor William Shatner. He will become the oldest person to enter space. 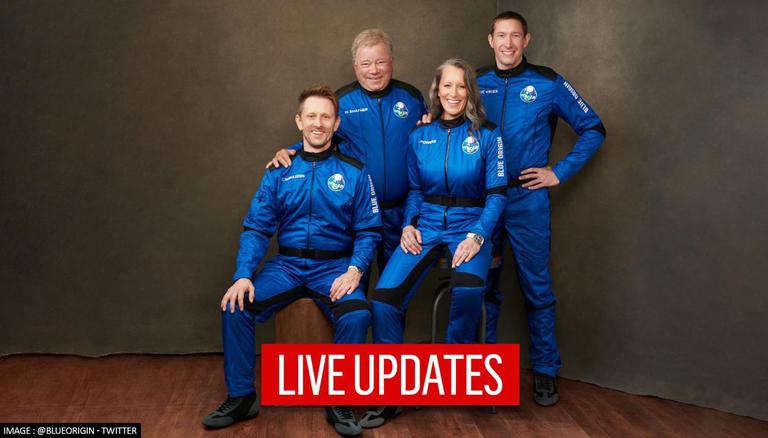 Jeff Bezos' Blue Origin is all set for its second crewed spaceflight that will carry four civilians including 'Star Trek' fame actor William Shatner. He will become the oldest person to enter space.

With his first-ever flight, William Shatner broke the record of being the oldest person to travel to space at 90 years of age. The record previously belonged to Wally Funk who reached space at the age of 82.

William Shatner, during his post-touchdown interview, teared up and thanked Jeff Bezos for the opportunity.

Jeff Bezos raced to the space capsule to welcome the astronauts with a big thumbs up, and opened the hatch followed by a bottle of champagne. 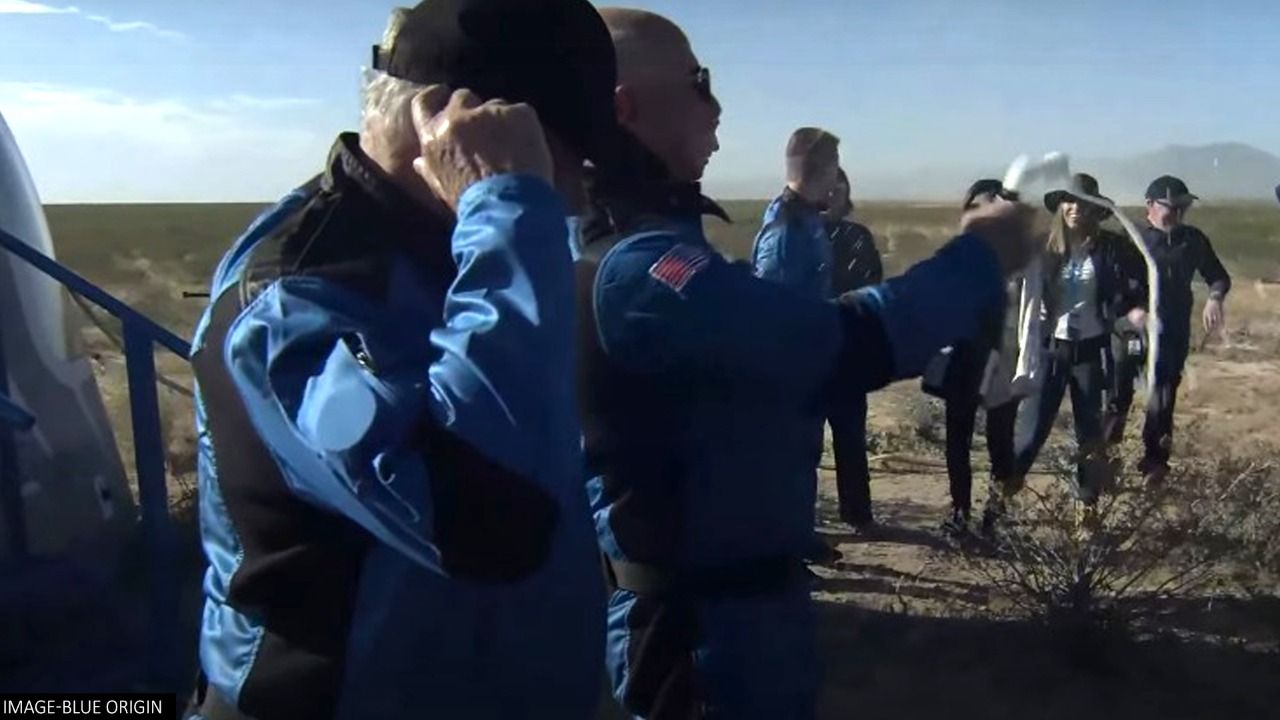 All four astronauts have safely and successfully touched down after 11 minutes of flight time. This marks Blue Origin's second successful crewed spaceflight. 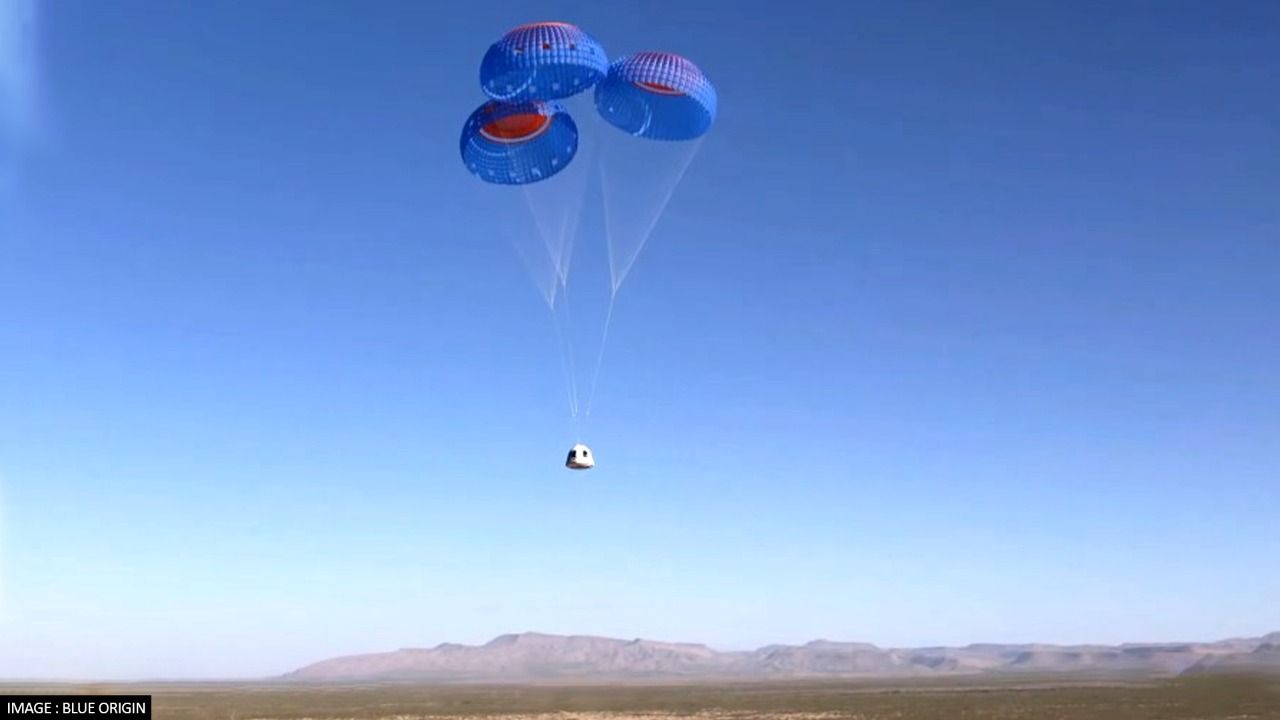 The New Shepard rocket has landed after escorting the capsule over Karman line. The capsule will stay in space for 11 minutes. 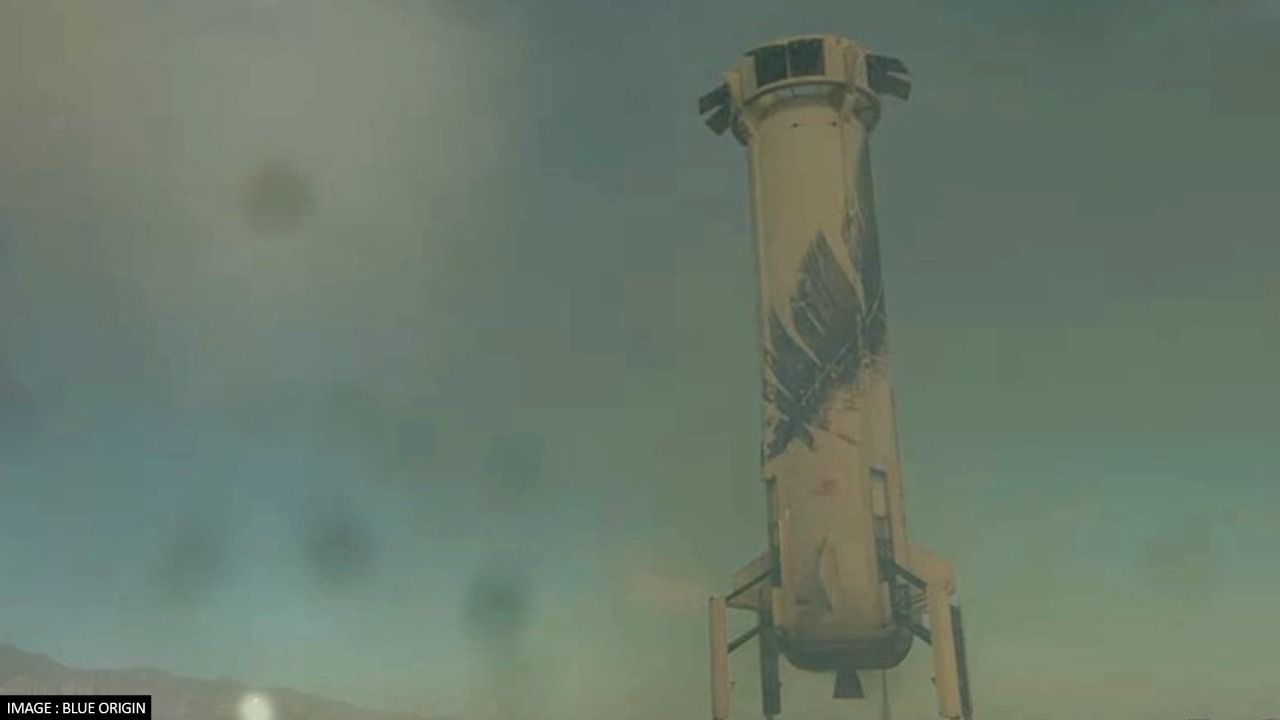 The Blue Origin NS18 crew is nearing its launch with under four minutes to launch.

19:46 IST, October 13th 2021
Astronauts strap their belts aboard the spacecraft

All four astronauts have strapped their belts in the space shuttle for final preparations, Bezos closes the hatch.

The #NewShepard hatch is closed. Final checks are underway. #NS18 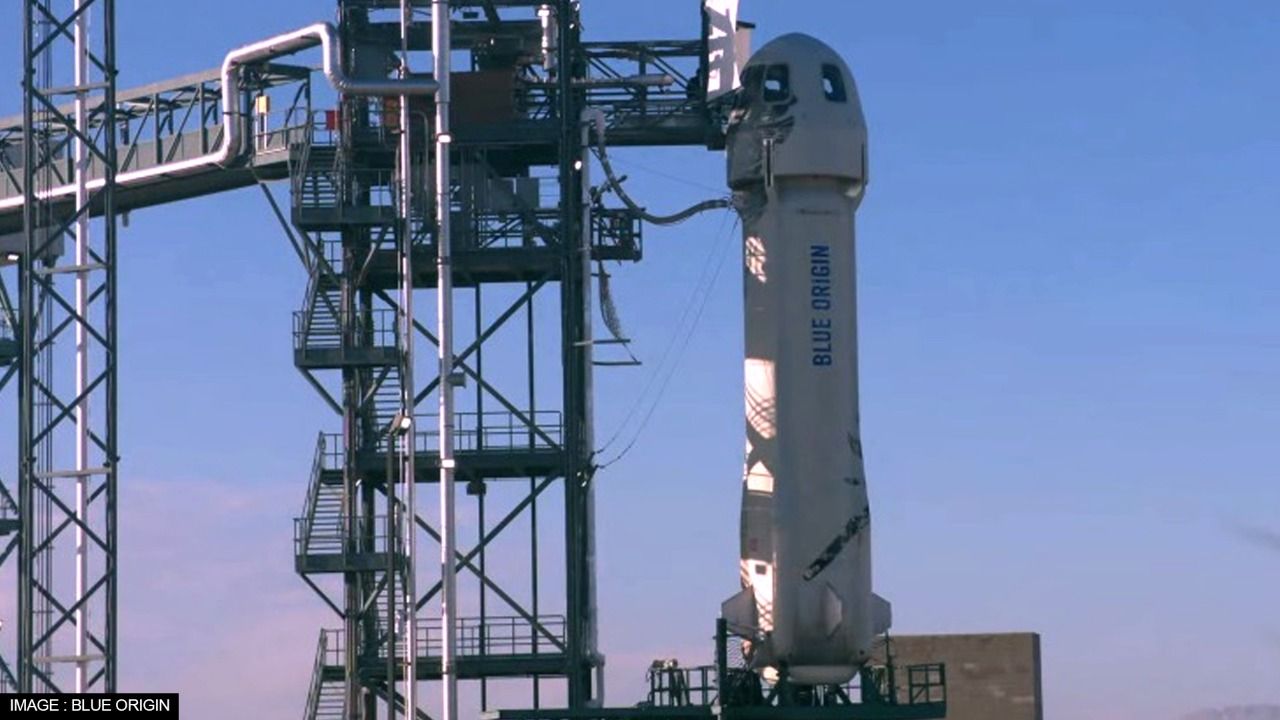 Blue Origin has delayed its flight time by 40 minutes, however, the astronauts have arrived at the mission control centre and are heading at the launch site. 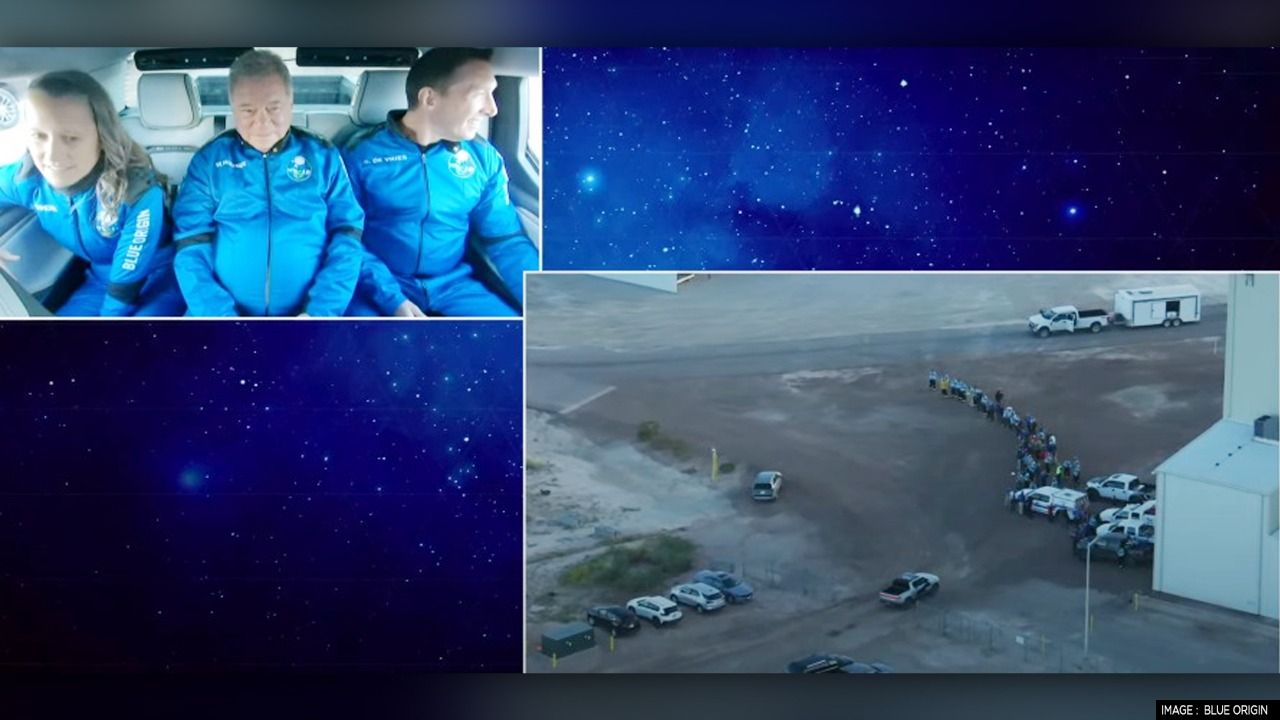 Ahead of Blue Origin's second launch, the company released special coins that are specially designed for the NS18 crew members. The coins are imprinted with texts that read, "You will be known in history for taking a pioneering first step toward millions of people living and working in space to benefit Earth".

Coming up next on the webcast: a special coin ceremony with our #NS18 astronauts and CrewMember 7. Watch live on https://t.co/7Y4TherpLr pic.twitter.com/SWQsk1jY0z

🖖 @WilliamShatner We wish you all the best on your flight to space.

You are, and always shall be, our friend. https://t.co/5nmXfvMydU pic.twitter.com/oL65h3y9Hi

After nearly 50 years of warping across galaxies and saving the universe from a variety of alien threats and celestial disasters, Star Trek’s William Shatner finally went where no other member of Starfleet has gone before. This weekend, the acclaimed actor and director was honored with NASA’s Distinguished Public Service medal, the highest award bestowed by the agency to non-government personnel.

The honor was presented to Shatner Saturday evening in Los Angeles at his annual Hollywood Charity Horse Show, where he raises money for a variety of children’s causes. The citation for the medal reads, “For outstanding generosity and dedication to inspiring new generations of explorers around the world, and for unwavering support for NASA and its missions of discovery.”

“William Shatner has been so generous with his time and energy in encouraging students to study science and math, and for inspiring generations of explorers, including many of the astronauts and engineers who are a part of NASA today, ” said David Weaver, NASA’s associate administrator for the Office of Communications at NASA Headquarters in Washington.  “He's most deserving of this prestigious award.”

A life-long advocate of science and space exploration, Shatner gained worldwide fame and became a cultural icon for his portrayal of Captain James Tiberius Kirk, commander of the starship USS Enterprise in NBC’s science fiction television series “Star Trek” from 1966 to 1969. It was a role he would reprise in an animated version of the series in 1973, seven major films from 1979 to 1994, and more recent “Star Trek” video games.

Shatner’s relationship with NASA dates back to the original series, with references to the space agency and its programs that were incorporated into storylines throughout the television and film franchises. In 1976, when NASA was ready to introduce a reusable spacecraft as the successor to the Apollo program, a new space shuttle prototype, originally to be named Constitution, was dubbed Enterprise in honor of the Star Trek universe and the work of Shatner and his series co-stars.

More recently, Shatner donated his time and vocal talent to host the NASA documentary celebrating the 30th anniversary of space shuttle missions. To honor the final flight of shuttle Discovery in 2011, he agreed to recreate his famous Star Trek television introduction in one of the last wake-up calls for the astronauts of the STS-133 mission.

In 2012, he hosted a video presentation previewing the dramatic mission of the Mars rover Curiosity and voiced his support for NASA spinoff technologies that come as a result of investments in science, technology and exploration.

Other past recipients of the NASA Distinguished Public Service Medal include astrophysicist Neil deGrasse Tyson, former NASA Jet Propulsion Laboratory director and Voyager project scientist Edward Stone, theoretical physicist and astronomer Lyman Spitzer, and science fiction writer Robert Heinlein. The award is presented to those who “… have personally made a contribution representing substantial progress to the NASA mission. The contribution must be so extraordinary that other forms of recognition would be inadequate.”

Besides his acting and directing talents, Shatner is a prolific author, having taken the reins for nearly 50 books, and is an accomplished horse rider and breeder.

The company informed that the flight profile of Blue Origin's second crewed launch will be the same as it was for the first one i.e. 11 minutes. In these 11 minutes between takeoff and capsule landing, the astronauts will experience three to four minutes of weightlessness when they reach the Kármán Line, the internationally-recognized boundary of space.

Blue Origin's NS18 mission crew has arrived at the launch site in West Texas and is suiting up for the launch. The live coverage has officially begun that the viewers can watch on Blue Origin's website or on its YouTube Channel.

17:55 IST, October 13th 2021
Read what Shatner wrote in his postcard before blasting off to space

All four members of the mission NS18 crew have prepared a handwritten postcard that they will take with them to space. In Shatner's note, he had written, "This is the most important and practical concept for space use and for aiding in saving planet Earth" which was shared on Twitter.

Special delivery: #NS18 astronauts put pen to postcard ahead of their flight. When they take to the skies, they’ll boldly go where no mail carrier has gone before. #postcardstospace 🚀 pic.twitter.com/FjG4TR42we

The crew of #NS18. pic.twitter.com/qKRAOY39TS

Jeff Bezos has chucked in his childhood-era artwork that he made to play Star Trek with his friends when he was nine years old. Bezos shared the paper tricorders and communicator which Star Trek actor William Shatner has agreed to take with him to space.

Other than sending the oldest person to space, Jeff Bezos' company also owns the record of sending the youngest person to space that was 18-year-old Oliver Daemen. Besides, the company also made the record of sending first siblings to space in Jeff and Mark Bezos, who were also part of the crew. In its fourth record, Blue Origin's New Shepard RSS First Step became the first spacecraft that successfully completed a commercial suborbital flight with paying customers.

Once the actor William Shatner exits the Earth's atmosphere, he will become the oldest person to have visited space at the age of 90 years. With the awaiting launch, the company will break its own Guinness World record of sending the oldest person to space as Wally Funk (82) had the record to her name from Blue Origin's first flight in July 2021.

Viewers can watch the launch live on Blue Origin's official website and also on its YouTube channel where the company has scheduled the live telecast of the launch by the name, ‘New Shepard Mission NS-18 Webcast’. The lift-off will take place from Blue Origin's West Texas site at 7:00 pm (IST) and the broadcast is likely to commence an hour earlier.