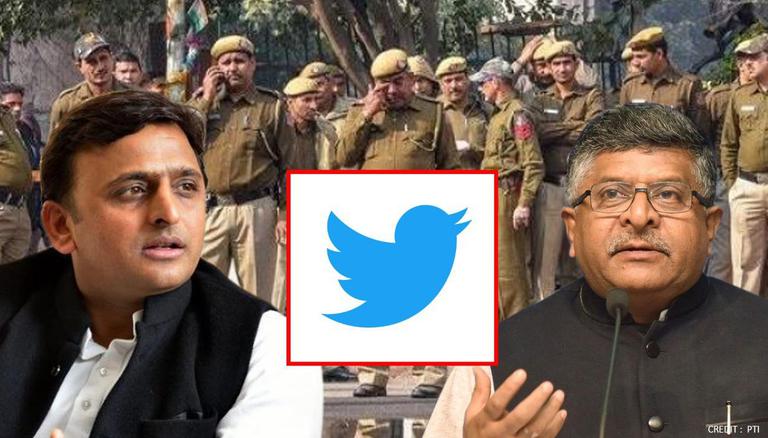 
Shortly after the Delhi Police on Monday landed at Twitter's offices in Delhi and Gurugram to issue summons and seek a response over the 'manipulated media' row and associated notice served on May 21, former Uttar Pradesh Chief Minister Akhilesh Yadav called it an "undemocratic and grossly condemnable act". Taking to his official Twitter handle, the former UP Chief Minister said that the police's visit to Twitter's offices will bring down the declining global image of the BJP government. "BJP is trapped in a web of lies, which have been laid by itself," he added.

Roughly translated from Hindi, Akhilesh writes, 'Raiding Twitter's offices in Delhi and Gurugram will bring down the declining global image of the BJP government. This is an undemocratic and grossly condemnable act. The BJP is trapped in a web of lies it has laid on its own. People will remember this'. 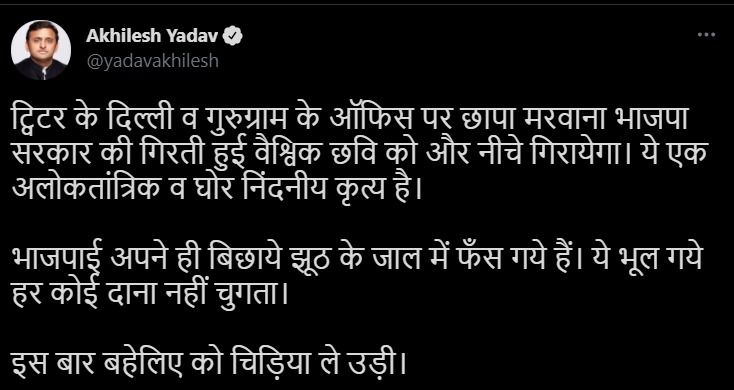 In a fresh development in the alleged Congress 'toolkit' saga and resulting 'manipulated media' row, officials of Delhi Police's Special Cell landed at Twitter's office in Gurugram and Delhi on Monday evening. Earlier, the Special Cell had sent a notice to the micro-blogging site and sought clarification for classifying BJP national spokesperson Sambit Patra's tweet on the alleged Congress 'toolkit' as 'manipulated media'.

The notice had been sent on May 21, right after the Centre communicated its 'strong objection' against the 'manipulated media' tag being used by Twitter for the 'toolkit' tweets by BJP leaders and sought the tag's removal. Rather than this, however, Twitter proceeded to flag 5 more BJP netas' tweets as 'Manipulated media'. As per sources, Delhi Police was prompted to visit Twitter's Gurugram office as the micro-blogging site failed to give a 'proper reply' to the notice sent before.

"It appears that Twitter has some information that is not known to the police. This information is relevant to the inquiry," Delhi Police PRO Chinmoy Biswal had said to PTI. Biswal said the Delhi Police is inquiring into a complaint in connection with which clarification has been sought from Twitter regarding the classification of a tweet by Sambit Patra as "manipulative". Meanwhile,  Twitter is yet to issue a response in the matter, at least till before the Delhi Police turned up at Twitter's office on Monday.

In a 'strong communication' to Twitter's global team, the Ministry of Electronics and IT had registered an objection to the use of 'manipulated media' tag on tweets made by Indian political leaders with reference to the 'toolkit'. The Union Ministry asked Twitter to remove the 'manipulated Media' tags affixed to certain tweets in the interests of 'fairness and equity'.

The Union Ministry has highlighted to Twitter that a complaint has been made by one of the 'concerned parties' (the Congress party) before law enforcement agency questioning the veracity of the 'toolkit', stating that the matter remains under investigation. Issuing a stern response to Twitter's 'unilateral conclusion' of tagging Patra's toolkit as 'manipulated media' while the matter is still under investigation, the Centre said that such tagging by the global micro-blogging website appears 'pre-judged, prejudiced and a deliberate attempt to colour the investigation'.