41 demonstrators were killed during the anti-coup rallies in Sudan that were launched after army generals toppled the nation's democratically elected govt. 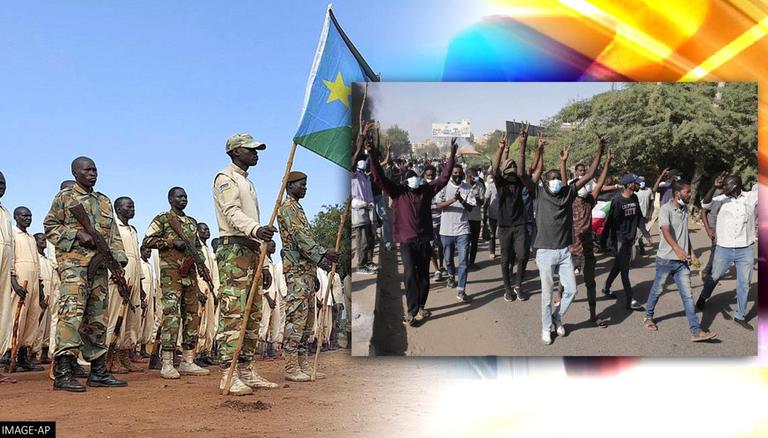 
A group of Sudanese doctors revealed that Sudan’s military forces had stopped injured protestors from receiving treatment as well as attacked hospitals since the army general Abdel Fattah al-Burhan launched a coup last month. As per a report from The Unified Office of Sudanese Doctors, which has been tracking protest-related deaths, it was stated that nearly 41 demonstrators were killed during anti-coup rallies in Sudan that were launched after army generals toppled the nation's democratically elected government, AP reported.

The Sudan Doctors Committee informed that the military has prevented several ambulances which have been carrying injured demonstrators from reaching hospitals to avoid getting treatment. They further described that the security forces have entered emergency rooms, detained patients, and opened fire and used tear gases inside at least two hospitals in the nation's capital since the October 25 coup. Sudan Army forces have sprayed tear gas within the Khartoum Teaching Hospital on Sunday, near the intensive care unit (ICU) and neonatal ward, according to a statement from the Sudanese doctors' administration.

Furthermore, in the latest release of the Sudan coup death toll, the doctors' committee stated that the newest fatality was a 16-year-old who was shot and killed by a bullet to the head on Sunday while he was demonstrating the new power-sharing pact between the military forces and the nation's ousted prime minister, Abdalla Hamdok.

Hamdok and General Burhan to work rapidly to put Sudan’s democratic transition back on track: Blinken

The nation's military forces as well as the police, both have been accused by the United Nation's top human rights agency of deploying excessive violence against pro-democracy protests, have yet to respond. The United States and other western nations have repeatedly urged the coup authorities to allow people to peacefully demonstrate.

On Monday, the US Secretary of State Antony Blinken met with Hamdok and General Abdel-Fattah Burhan individually, asking “Both leaders to work rapidly to put Sudan’s democratic transition back on track, ″ according to State Department spokesman Ned Price. Earlier, Price stated that the US has criticised the Sudanese military's violent assault on demonstrators and urged for Hamdok's return. He even requested to allow people to conduct peaceful demonstrations, according to the press release from the State Department.

READ | Sudan: Opposition rejects accord between Abdalla Hamdok and Army, calls it 'treasonous'

Sudan's removed prime minister Hamdok had inked an agreement on Sunday that would see him returned, over a month after he was put under house arrest following the military coup. The deal calls for Hamdok to lead an independent, technocratic Cabinet until national elections to be held. Even then, the cabinet would be under military control, AP reported.

Sudan's anti-coup rallies began on October 25, when thousands of people marched in the streets against the Sudanese army forces under the direction of Sudanese Army general Abdel Fattah al-Burhan who took control of the nation, dismissing the transitional government and arresting a number of civilian leaders. Since then, Sudan has been torn apart by military conflict. Millions of people around the country protested to demand a civilian-led transitional administration.