Female minister Condester Sichwale in Tanzania was ejected after male colleague Hussein Amar complained about her "too tight" trousers. 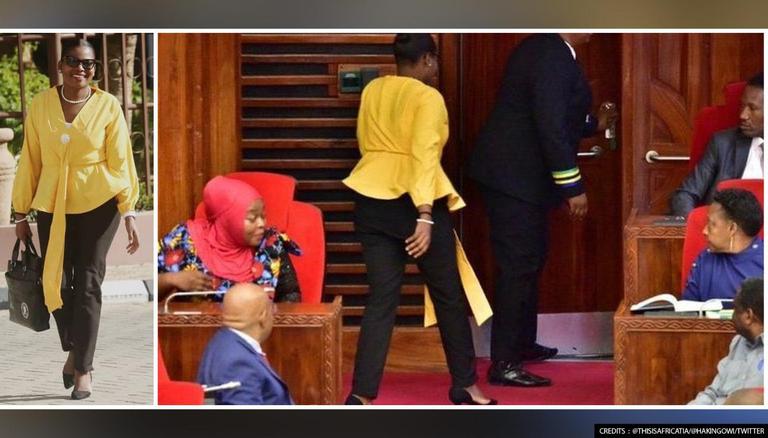 
A female MP in Tanzania was recently kicked out of the country’s parliament for wearing trousers deemed “too tight”. According to BBC, Condester Sichwale, a minister for the ruling CCM party, was ejected after male colleague Hussein Amar, who is a member of the same party, complained. Sichwale was told to “go dress up well, and then join us back later” before she walked out of the parliament.

The incident took place on Tuesday following a debate in Parliament House in Tanzania’s capital of Dodoma. After the session, Amar reportedly stood up to ask Speaker Job Ndugai for guidance on “modest” dress”. He had addressed Sichwale as his “sister seated with a yellow shirt” and said that the way some women dressed invited ridicule to parliament. Amar asked the speaker to “look at” the trousers she had worn.

Ndugai then ordered Sichwale to leave and said, “go dress up well, and then join us back later”. He added that this was not the first complaint he had received about female Member of Parliaments’ attire. He even told chamber orderlies to deny entry to anyone who was inappropriately dressed.

As per reports, Amar did not elaborate on what he found wrong with Sichwale’s outfit. However, he quoted the parliamentary rules which allow women to wear trousers but stipulates that clothes should “not be tight-fitting”. He even accused Sichwale of wearing even though she was wearing transition lenses that change depending on light conditions.

Following the incident, a group of MPs led by Jacqueline Ngonyani and Stella Manyanya then branded the move as “unfair” and said that there was nothing wrong with the outfit. The move also led attracted criticism online, with users accusing the Male MPs of “policing women’s bodies”. “I am annoyed with this. Like, really? I hate it when women's clothes, bodies and decisions are policed by men. And those pants ain't tight!! Uugh. Such a misogynistic power trip by the speaker,” said one Twitter user.

What does their parliamentary attire look like? Do they have a uniform or something? Cos I see nothing wrong in this

This is madness. African leaders always choosing to deal with these non-existent issues instead of solving real life issues that citizens face daily.

Seriously? The pants are not tight fitting at all and she looks presentable.
The big question I suppose is why do they still have rules that police what women should wear in this day and age? Proffessional/ presentable should be enough.