NASA Inquires About 'meteorite' In Australia, It Turns Out To Be 'interesting' Project

NASA asked for a report from school in Australia after a ‘meteorite’ crashed into their grounds leaving what appeared to be a smouldering mass of rock.

National Aeronautics and Space Administration (NASA) asked for a report from a secondary school in Australia after a ‘meteorite’ crashed into their grounds leaving what appeared to be a smouldering mass of rock and scorched earth. However, the world’s most renowned space agency mistook a school project for a meteorite crash. The principal of the Malanda State School in Queensland, Mark Allen, told 7NEWS that the authorities “had all sorts of inquiries from all around the world, including NASA who asked us to make a report to the Kennedy Space Centre.”

The so-called ‘meteorite crash’ images caught the internet’s attention in a jiffy and went viral. The images were shared on Facebook by page, ‘Australia Crash Investigation Unit’ and had garnered hundreds of comments by the time the truth came out. The reality behind it was that it was a school assignment for journalism students who had been tasked with reporting on the incident along with interviewing the ‘witnesses’ to the space rock’s crash as well as the emergency services.

While talking to the media outlet, Allen also added that “it is important to note that it was just a bit of fun, and the excitement in the air this morning was absolutely magic.” However, the images caused a stir online with several users commenting about safety. However, there were many others noted that "Something that big would cause a crater as big as Meteor Crater in the US". Another wrote, "School maintenance and grounds crew having a laugh at the school science department, well done guys wish I had thought of that at the school I worked at." 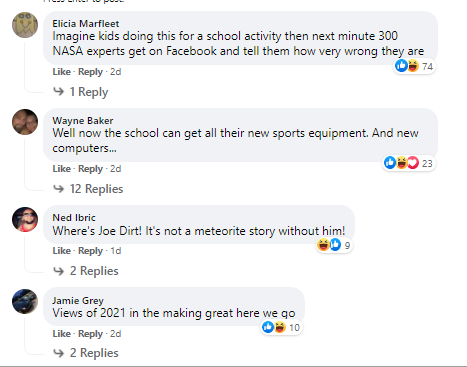 While the latest incident was just a school assignment, actual meteor showers are annual events with hundreds of skywatchers waiting for the same. There are a huge number of meteor showers that will take place this year on the following dates:

Read - NASA Says Asteroid Bigger Than Eiffel Tower Will Pass Earth; All You Need To Know