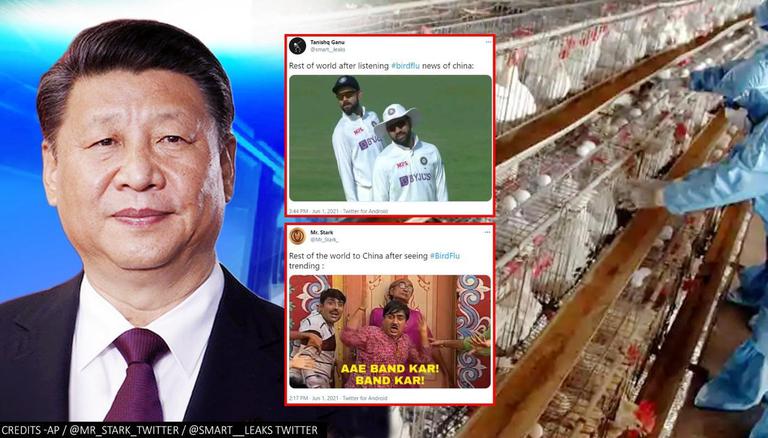 
Even as COVID-19 continues to rage across the globe, China on Tuesday confirmed the world's first case of a human infected with H10N3 avian influenza, commonly known as Bird Flu. Burdened with the flak received for being the country where the first case of COVID-19 was identified as well (in Wuhan), China's tryst with viruses hasn't gone down very well with netizens across the globe reeling with the subsequent lockdowns and restrictions imposed in wake of the second wave of the Coronavirus. While it was bats earlier, this time the virus said to have originated from poultry has triggered a sense of fear even though China has maintained that the case reported is 'rare' and that chances of large-scale spread are very bleak.

At a time when the world battles the most lethal pandemic ever known to humanity and is on its way back to normalcy with vaccines proving to be effective, the possibility of another animal-to-humans virus transmission has left Twitter pondering what lies in store next. As China reported the first case of a human being infected with bird flu, Twitter erupted with despondent reactions as plenty sought a 'break' from the virus while many sighed 'not again'. One of the netizens also likened the bird flu transmission to humans to a sequel of movies, possibly predicting that this might be a disaster as often noticed in the case of movies.

Here are some of the wittiest and humorous reactions:

China everytime after Every New disease inventions to the world:
#birdflu pic.twitter.com/570hypX49c

why do the sequels always suck

#H10N3#birdflu#China
World: 2021 will be an amazing year
Meanwhile #China : pic.twitter.com/CjQFtBFR86

Rest of the world to China after seeing #BirdFlu trending : pic.twitter.com/BNoQ9ntJkv

As per the Chinese state media Global Times report, China’s health authorities reportedly said on Tuesday that it was a rare poultry-to-human transmission and noted that the risk of large-scale spread of bird flu is extremely low. The world’s first case of human infected with avian influenza was confirmed in a 41-year-old man from Zhenjiang, a city in Jiangsu Province.

China’s National Health Commission (NHC) on Tuesday reportedly said in a statement that the man witnessed a fever along with other symptoms on April 23 and was then admitted to a local medical institute for treatment on April 28. However, the full genetic analysis of the virus obtained from the 41-year-old revealed that he tested positive for the H10N3 virus, making him the first human case of avian influenza. The analysis also showed that the H10N3 virus was of avian origin and did not have the ability to effectively infect humans, reportedly NHC experts believed.

H10N3 is a subtype of the Influenza A virus which is commonly known as the bird flu virus. The virus is normally fatal to wild birds and poultry because among animals it can be spread through respiratory droplets, similar to flu and COVID-19, reportedly said Yang Zhanqiu, a deputy director of the Pathogen Biology Department at Wuhan University.