Another footage from outside the restaurant in China shows attackers dragging the woman who rejected the man's advances and beating her as passersby look on. 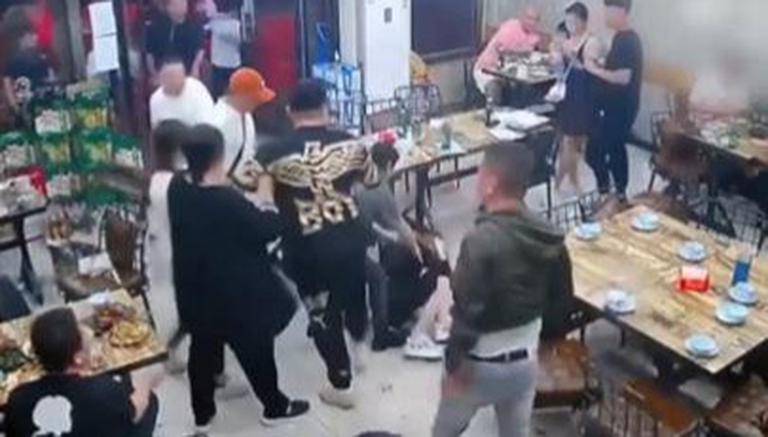 
Nine people have been arrested by Chinese authorities after a shocking video of multiple men assaulting several women at a barbecue restaurant in Tangshan in northern Hebei province went viral on social media. The incident has sparked widespread outrage.

The CCTV footage, time-stamped 2.40 am Friday, shows a man approaching a table where four women were seated and placing his hand on a woman's back. The woman snubbed his attempts several times before the wrongdoer slapped her, leading her to retaliate. A fight broke out with a group of men entering the eatery and mercilessly thrashing the woman and her friends, including kicking them and throwing a chair.

Another footage from outside the restaurant shows attackers dragging the woman who rejected the man's advances and beating her brutally as passersby look on. Later, photographs of the victim lying on a stretcher with swollen and bloodied face went viral.

The assault and public outcry reignited a debate in China about misogyny and women's mistreatment. A viral video of a woman tied to a hut wall earlier this year had sparked outrage after police originally denied she was a victim of human trafficking. Later, it was discovered that she had been sold as a bride.

READ | China fires back at WHO's report on COVID-19 origins; accuses US of engineering bioweapons

According to a statement released by officials on the microblogging platform Weibo on Saturday, all nine suspects were apprehended.

Two women were taken to the hospital with non-life-threatening injuries and were being treated. Their condition has been described as stable. Two others sustained minor injuries.

The entire incident, both inside and outside the restaurant, was captured on video in just five minutes. The video of the incident was reportedly first shared on Weibo.

Netizens have decried the incident and chastised Tangshan police for taking so long to apprehend the perpetrators. "That video was hard to watch. No one did anything. That woman was lucky to survive a beating like that," one user said.

Another said, "Woman in #Tangshan was having a meal with her friends when a man started harassing her. After she rejected his advances, he and his friends assaulted her until she was severely injured. Other women who tried to help her were also beaten up."