China has warned Norway against awarding Nobel Peace Prize to Hong Kong activists, saying it doesn’t want to see the politicisation of the coveted award. 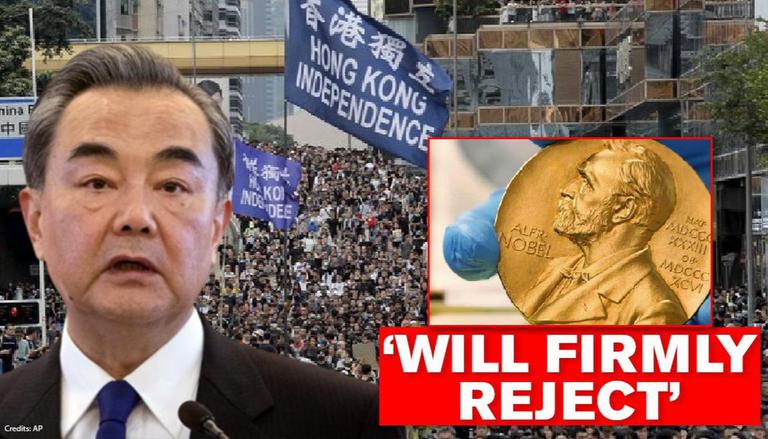 China has warned Norway against awarding Nobel Peace Prize to pro-democracy activists of Hong Kong, saying it doesn’t want to see the politicisation of coveted award. Chinese Foreign Minister Wang Yi was on a rare visit to Norway as the country prepares to take up the rotational seat of United Nations Security Council, of which China is a permanent member, for 2021-22.

“I would only say one thing: In the past, today, and in future, China will firmly reject any attempt by anyone to use the Nobel Peace Prize to interfere in China's internal affairs,” Wang told reporters when asked about the possibility.

The decision to award the Nobel Peace Prize to Dalai Lama, head monk of Tibetan Buddhism, for his willingness to compromise and seek reconciliation despite brutal violations had irked China. Later, the Nobel Foundation awarded the prize to Lui Xiaobo for his long and non-violent struggle for fundamental human rights in China. The decision immediately froze diplomatic relations between Norway and China, which resumed in December 2016.

Hong Kong has been the epicentre of pro-democracy protests and China enforced a controversial security law which has allegedly undermined the autonomy of the region. Several countries have revoked the extradition treaty with the semi-autonomous region, calling the draconian law as a flagrant violation of Sino-British agreement after which the city returned to Chinese rule.

According to a Hong Kong daily, the foreign minister said that the Chinese government doesn’t want to see anyone politicise the Nobel Peace Prize. Calling on Norway to cherish the current relationship, Wang said that the bilateral relationship can continue to develop in a sustained and sound manner if both parties can “continue to respect each other and treat each other as equals.”

At a press briefing on August 28, Norwegian Foreign Minister Ine Eriksen Søreide said that the leaders had an extensive discussion ranging from COVID-19 response to international trade and the free-trade agreement. She said that they also had extensive discussions on human rights, an issue of international concern given China’s history and ongoing crackdown in Xinjiang.

“In addition to that, we have of course discussed some of the pressing international issues of the day, nuclear disarmament being one of them,” said the Norwegian minister.