After a crackdown on billionaires, entertainment industry & Uighur Muslims among others, Xi Jinping-led regime's next target seems to be the education industry 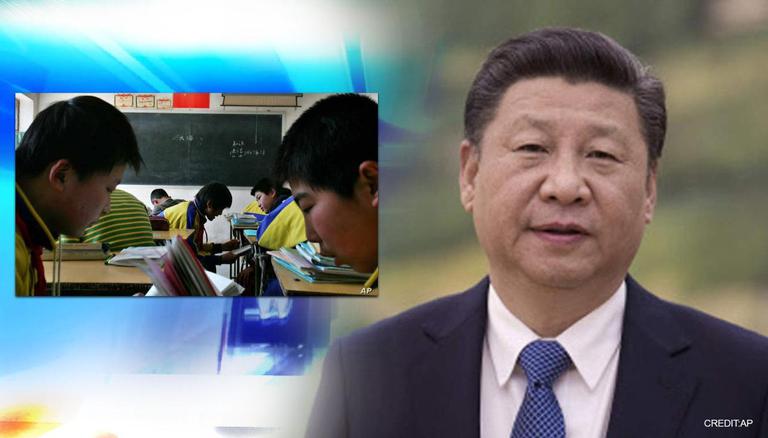 
After a crackdown on the tech industry, the entertainment industry and Uighur Muslims among others, the Xi Jinping-led Chinese regime's next target seems to be the education industry. The education ministry under the autocratic Chinese regime has now introduced "Xi Jinping thought on Socialism" in the curriculum to indoctrinate the youth under the garb of inculcating nationalism in the country.

The primary students as young as seven years old will now be taught to love the ruling Communist Party besides cultivating love for the country and socialism. Not only primary students but Xi Jinping's political ideology will also be incorporated in the curriculums of middle schools to colleges and graduate programs.

"To cultivate the builders and successors of socialism with an all-round moral, intellectual, physical and aesthetic grounding and a hard-working spirit, we must arm students' minds with Xi Jinping Thought on Socialism with Chinese Characteristics for a New Era," reported a Chinese mouthpiece.

The new school books come with President Xi Jinping's smiling face along with quotes while the content of the books comprises mostly of achievements of the communist party's role in fighting COVID-19 and poverty alleviation and lessons on Chinese civilisation. Interestingly, the textbooks have termed Xi Jinping as "Grandpa" for the youth of the country.

One of the textbooks reads, "Grandpa Xi Jinping is very busy with work, but no matter how busy he is, he still joins our activities and cares about our growth."

Reportedly, there have been apprehensions among the parents over the new curriculum, however, they cannot air their grouse given the reputation the Xi Jinping regime carries for aggressively suppressing voices that speak against the regime.

Touted to be the most powerful Chinese leader after CPC founder leader Mao Zedong, Xi Jinping is set to govern the country indefinitely unlike his predecessors, who had to step down as president after governing for two terms. In 2018, during a legislative meeting term limits of presidentship was abolished, paving way for Xi Jinping to retain power throughout his lifetime. Xi Jinping enjoys the absolute leadership of the Chinese Military, the Chinese Communist Party and the Chinese Government.

Recently, the communist regime under his leadership has led a crackdown on various subjects ranging from video games, celebrity culture and online fan followings, for what the regime claims to be a bad influence on the youth of the country. Media houses, billionaires and several other individuals who have been critical of the Xi Jinping government in the past have either been arrested or have disappeared from public light. The autocracy of the regime has led to the likes of Alibaba founder Jack Ma and several others, living in oblivion who were once the messiahs of the tech industry, who substantially contributed to the Chinese economy.