In China, Drones Rain From The Skies As Sound-and-light Show Ends In Epic Fail 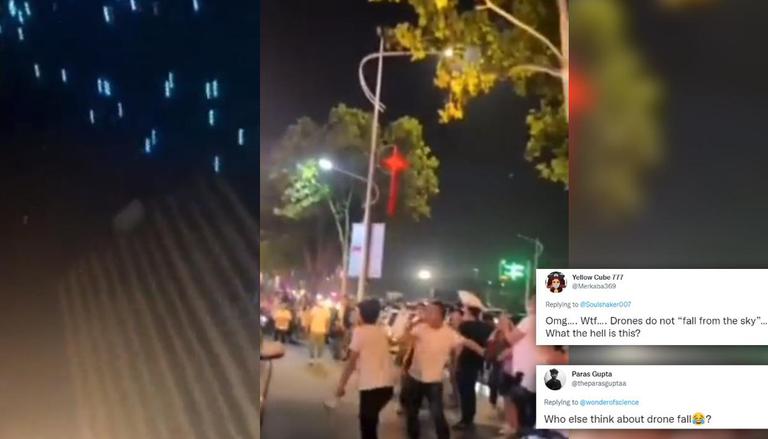 
A drone light show organized to celebrate the inauguration of a shopping mall in China resulted in a total disaster when the devices began to rain from the sky in the middle of the show, hitting buildings and vehicles on the ground and leaving people running for cover. In a video that was shared from the drone light show, people can be heard screaming “be careful” and “back off” as they ran from one end of the street to another, seeking shelter from the drones falling to the ground, minutes after the light show began. There were as many as 5,000 people on the streets including women and children gathered to see the light show.

'More and more came off,” said a spectator

A spectator of the light show, speaking to a global publishing house said, "More and more drones came off,” and added, “Some flew very far away, and some hit the trees. The eye-witness said he would still watch drone shows in the future. “They are still quite impressive,” he said. “But I will keep a safe distance.” It was reported that seeing the drones falling from the sky, the organizers and staff members let people take refuge inside the mall when the drones started falling. Later, they assembled to pick up the drones from the streets.

It’s unclear what exactly caused the accident. An organizer told China News Services that “operation errors” might have led to the fall, and no injuries had been reported.

A 200-drone light show in Zhengzhou, China ended disastrously during the weekend, with drones plummeting into cars and buildings. Thankfully, no injuries were reported after the incident [read more: https://t.co/MjwZSnC5lx] pic.twitter.com/DQZcAlerWO

@red_pill_junkie You say disastrously, I say "hey, free drones for about 200 people"

Someone got an umbrella?

Cloudy with a chance of dronefall

WE RECOMMEND
US slams China over 'provocative' military activity near Taiwan; urges to maintain peace
China might witness social unrest as government tightens restrictions on migration: Report
US intends to have frank conversations with China on trade ties, says USTR
China denies rumours of its military deployment to Afghanistan's Bagram Air Base
UNHRC: China, other nations express deep concerns over prevailing racism in some countries