Days after Rome backed out from Beijing’s Belt and Road Initiative, Italy has repositioned its ties with China as old Western alliances are back on the G7 table 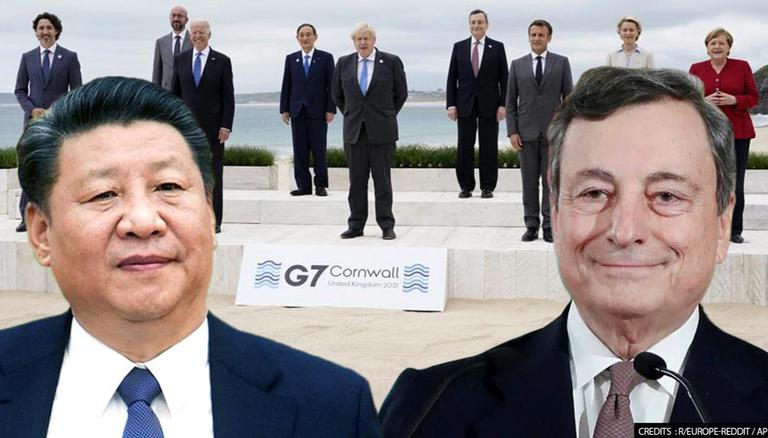 
Days after Rome backed out from Beijing’s ambitious Belt and Road Initiative (BRI), Italy has repositioned its ties with China as old Western alliances are back on the G7 table.

Reports state that since current Prime Minister Mario Draghi took office this year in February, Italy's official stand on the US-China rivalry has allowed its return to international alliances. At the beginning of his mandate, the newly appointed PM clarified that his administration is "strongly pro-European and Atlanticist" while expressing concern over the increasing number of conflicts involving China.

In 2019, Italy, under the then Prime Minister Giuseppe Conte, had signed a memorandum of understanding supporting China's multi-trillion Belt and Road Initiative. Beijing represented an opportunity to export made-in-Italy products.

As the two countries began to finalise the deal, warnings came on many fronts. Both American and European leaders cautioned Rome against signing a bilateral agreement with Beijing. PM Conte, on the other hand, reassured the public that the agreement was purely a commercial one, that favoured Italian national interests.

Conte was lured by China's huge market potential. Highlighting both America’s role as Italy's main strategic partner and China's growing global footprint, Conte envisioned a role for Rome and Brussels to act as a potential bridge between Washington and Beijing.

However, two governments and one Prime Minister later, Italy seems to have learned its lesson. In addition to a change in perception, discussions are also taking place on China, within the Italian Parliament.

Beijing's escalating crackdown in Hong Kong and a renewed global attention toward human rights abuses in Xinjiang have sparked debate in Italy, where members of the lower chamber are asking the government to push back against China.

In addition, Italy also suspended talks over the potential sale of Italian truck-maker Iveco to China's FAW Group – a move, seemingly benefited from coordination with France.

The failed handling of the Belt and Road memorandum has come with severe political costs. As a member of the G-7, a founding member of both the EU and NATO and the third-largest economy of the eurozone, Italy endorsing BRI had given Chinese President Xi Jinping's pet project a significant boost at home and abroad.

On the other hand, joining the Belt and Road meant that Rome became viewed as "the European weak link in the power struggle with China”. Rome's new China policy under the Draghi administration thus seeks a return to its "historical anchors" and is showing a clearer vision of Italy's international posture.

The country’s stronger alignment with the European and trans-Atlantic stance is exemplified by the endorsement of a green alternative to the Belt and Road, ‘Build Back Better’ announced at the G-7 meeting this month.