“It was accidental discovery. At that moment, we realized that this could be fungus fossil that scientists have been looking for a long time,” Tian Gan said.

Scientists have discovered the oldest evidence of land fungus in a cave in southern China. According to findings published in the journal Live Science, the "wee microfossil" was found to be more than 635 million years old and was too microscopic to be visible from the human naked eye. The pyritized fungus-like microfossil belonged to the Ediacaran-period dubbed as ‘Snowball Earth’, and was embedded in small cavities within well-studied sedimentary dolostone rocks of the Doushantuo Formation at Weng’an, South China.

“It was an accidental discovery. At that moment, we realized that this could be the fossil that scientists have been looking for a long time,” Tian Gan, a Ph.D. student at Virginia Tech said in the study. “If our interpretation is correct, it will be helpful for understanding the paleoclimate change and early life evolution,” he added. The primitive fungi fossils consist of branching filaments of two morphological types and trace amounts of organic matter. It also contains hollow spheres, from which, filaments in the length of hundreds of microns at the minimum protrude in varying shapes ranging from bent, curved, or even straight. 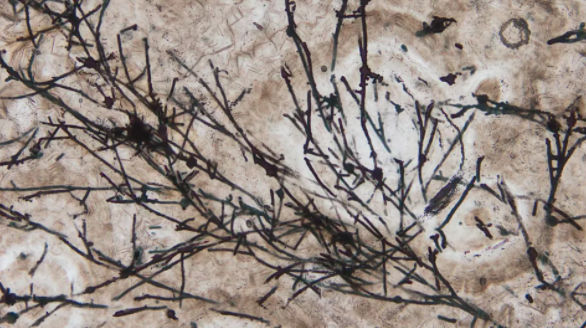 [Microscopic image of the fungus-like microfossils. Image: © University of Cincinnati]

According to the scientists, the ancient plant may behave catalyzed atmospheric oxygenation that led to the biosphere evolution, post-Earth’s catastrophic ‘snowball Earth’ event, scientists in the study explained. This is because, the planet was locked in ice from 750 million to 580 million years ago and the land fungus helped the planet transition from a frozen iceball to a planet with a variety of ecosystems, as per the research. 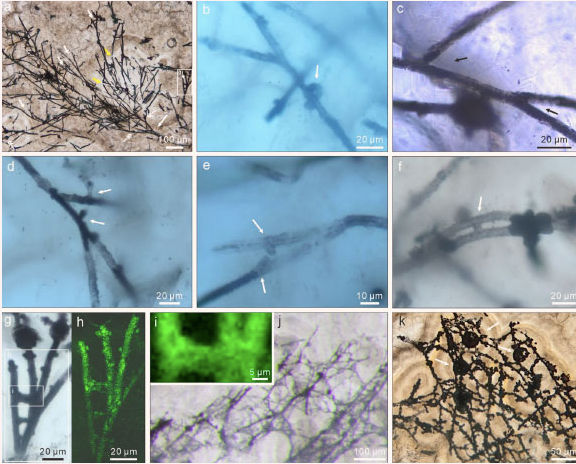 The analysis of the wee microfossil of the fungus indicates that it helped in the evolution of the diverse life-forms by breaking down minerals and organic matter and recycling nutrients into the atmosphere, scientists stressed. “Ancient fungus could have played an important part in reshaping Earth's geochemistry, creating more hospitable conditions that paved the way for terrestrial plants and animals to eventually emerge and thrive,” the study concluded. A professor of geosciences with the Virginia Tech College of Science (VT) in Blacksburg, Virginia said in the study that there’s “element of serendipity” in the fossil. Having worked with microfossils, one knows what kind of rocks to look at," Xiao told Live Science.