Yanjin, World's Narrowest Metropolis In China, Is A Competition For Fictional Worlds; Read

Yanjin County is often known as the world's narrowest metropolis. The city is built alongside the Nanxi River and nestled between mountains. 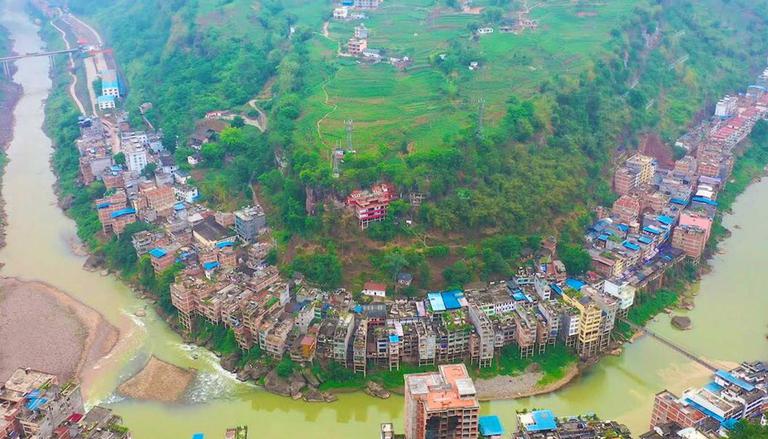 
Yanjin County is often regarded as the world's narrowest metropolis. The city is built alongside the Nanxi River and nestled between China's Yunnan Province's rugged mountains. People find it difficult to believe that Yanjin metropolis exists in reality while looking at the county from above. The town is shaped like a sandwich, with the Nanxi river running through it and large buildings on either side. But that is precisely what distinguishes the town. It appears to be something people would expect to see in a fictional film.

The settlement is only 30 metres wide at its narrowest point, and over 300 metres wide at its broadest point. On either side of the river, the city is spanned by a major roadway that spans many kilometres. Surprisingly, there aren't many bridges in the area. There is one more distinguishing feature of the town. The land is a valuable commodity in the city, and many of the homes are built entirely on the river's banks. The homes are built on stilt-like slender pillars to protect them when the water level rises due to flooding.

For years, drone footage of the world's narrowest city has gone viral on Chinese social media. After watching the video, many people wondered why anyone would want to live in such a city, especially given one of the world's most powerful nations, China, has far more suitable land.

Welcome to Zhaotong City, China, the narrowest city in the world!
pic.twitter.com/L88AhsuXe8

Yanjin county, Yunnan is the narrowest town in China, nestled between mountains and the Guanhe River. - From r/China

For more than a century, the city has been colonised, and many citizens would not consider living anywhere else. With just one major route going through and being encircled on all sides by mountains, the county is inaccessible to many people, and the town is unable to flourish economically due to its infrastructure.

Yanjin County is in Yunnan Province, China, and is bordered on the north and east by Sichuan Province. It is a prefecture-level city, is in charge of its administration. Yanjin is named so because the city once owned salt wells and built a ferry to get around the flood. It was the home of the Bo people in ancient times. Xia and Shang were part of the Liangzhou area but eventually switched. Yanjin belonged to the Great Gate Hall of Wumeng Mansion when it was handed to the local administration in 1727. Yanjin was the name given to the county when it was formed in 1917.