Nagorno-Karabakh Conflict: Why Are Armenia And Azerbaijan Fighting Over The Region?

What started almost a century ago in the Nagorno-Karabakh region has now threatened to blow into a regional war. Here's a look at the history of this conflict.

What began almost a century ago as a dispute over the Nagorno-Karabakh region, has over the years resulted in severe human rights violations, failed diplomatic talks, refugee crisis, deaths and destruction. Tensions over the contended South Caucasus piece of land mounted up again last week, with Armenia and Azerbaijan blaming each other over who instigated the most recent conflict. While both the Transcaucasian countries held 'substantive' talks on October 10 in Moscow, there were already reports of fresh fighting between the two forces just hours after a ceasefire came into force.

Fresh conflict hit the Nagorno-Karabakh region on September 27, bringing the issue back into the limelight. More than 400 people have been reportedly killed since then and thousands more displaced (Azerbaijan has still not released data of losses on their side). Both the former Soviet nations have blamed each other for the fresh round of artillery firings, considered the worst flare-up the region has seen so far.

So what led to this conflict? Why are Armenia and Azerbaijan fighting over the Nagorno-Karabakh region? And more importantly, what are the stakes here for Russia and Turkey?

The Roots of conflict between Armenia and Azerbaijan

Holding a referendum at that time, the Autonomous Oblast of Nagorno-Karabakh region decided to stay independent instead of joining either territory. What began as a relatively peaceful demand to unify with Armenia, soon turned into an increasingly violent conflict between ethnic Armenians and ethnic Azerbaijans. The fightings that lasted up until approximately 1994, hit a low point when both the former Soviet Union nations accused each other of ethnic cleansing.

The situation worsened after the Nagorno-Karabakh Autonomous Oblast in Azerbaijan decided to unify with Armenia (given its massive Armenian population) in early 1988. Full-scale fighting in 1992 compelled international bodies to take notice and mediate a ceasefire between Armenia and Azerbaijan. After several failed diplomatic talks, a Russian-brokered ceasefire was agreed upon in 1994, essentially leading to a diplomatic mediation.

However, this full-blown conflict has its roots in the early 20th century when the former Soviet Union drew borders. The drawing out of borders (to define territories among various ethnic groups) play a major role in the conflict between the two nations today.
Policy expert Svante E Cornell in his paper, 'Undeclared war: The Nagorno-Karabakh conflict reconsidered' explains how 'when the Transcaucasus was incorporated into the Soviet Empire in 1920-21, the border between the republics of Azerbaijan, Armenia, and Georgia were not determined immediately'. It took the Soviet Union three years to determine the political struggle of Karabakh region. Initially, Stalin and Azerbaijan (under Soviet pressure) agreed to transfer Karabakh, Zangezur, and Nakhichevan to Armenian control. However, Azerbaijan later refused and as Cornell points out, 'the pendulum swung back'. 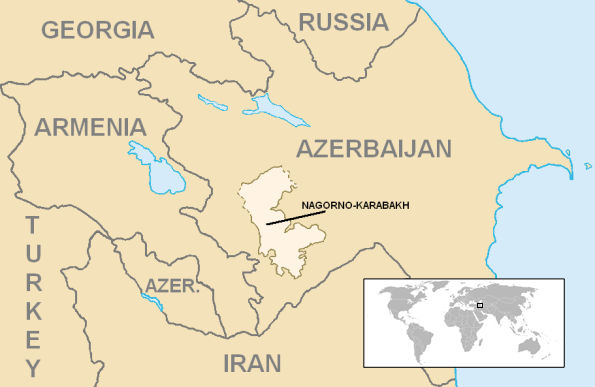 Joseph Stalin (premier of Soviet Union), under Turkish influence (the beginning of Turkish stakes), determined that both Karabakh and Nakhichevan were to be under Azerbaijan control. Nakhichevan became an autonomous republic in 1924, and Nagorno-Karabakh was given the status of an autonomous oblast. While the region is under Azerbaijan, it has been given a substantial amount of autonomy. Cornell writes, 'Armenia has, ever since, consistently attempted to reverse the decision'.

Another reason for the Soviet Union favouring Azerbaijan was that the Bolshevik ideology was very well received in the Caucasus. Armenia, on the other hand, had shown no communist tendencies.

What are the stakes for Russia?

Apart from brokering a ceasefire in 1994, and the latest in October 2020, Russia has its own interests in the Caucasus. Russia has its troops placed in both Armenia and Azerbaijan and has over the years (after the collapse of the Soviet Union) taken a neutral position between the two.

As Cornell further explains in his paper, following a policy of 'divide and rule', Russia has been stepping up military support for Armenia to force Azerbaijan to make concessions and return to Moscow's influence. Russia prefers a Russian-only mediation to the Minsk process of the Organisation for Security and Cooperation in Europe. Moscow first wants to re-establish control over the borders of the CIS (Commonwealth of Independent States) with Turkey and Iran, and thus wants to have troops posted in Azerbaijan, as it does in Armenia and Georgia. Moscow also has vested interests in Azerbaijan's oil riches.

What are the stakes for Turkey?

Joseph Stalin, who transferred Nagorno-Karabakh region under Azerbaijan was under the Turkish influence. The Soviet Union during the 1920s deemed Turkey as a potential ally (due to historical revolts against their respective countries' regimes and war with Britain), making Ankara's role in the Nagorno-Karabakh conflict significant.

Turkey, under Ataturk, couldn't have favoured any territorial arrangements favouring Soviet Armenia, since a strong Armenia could have potential territorial claims on Turkey. Thus, to establish the territorial integrity of the Turkish republic, it was imperative for Ataturk (former president of Turkey) to keep Armenia weak.

Turkey has voiced out its complete support for Azerbaijan even in the recent conflicts. As NPR points out, Ankara has close ethnic and linguistic kinship with Azerbaijan (majorly Muslim population). Turkey's relations with Armenia on the other hand are slain by the Ottoman Empire's 1915 mass killing of 1.5 million Armenians. There has been increasing demand in the global community to term it as a 'genocide', a term that Turkey rejects.

Armenia and the Kremlin also accused Turkey (without taking its name) of flying fighters from Syria and Libya to the Nagorno-Karabakh region and providing direct military support to Azerbaijan. The Turkish military is highly active in both Arab nations.

Can the Nagorno-Karabakh conflict spill over?

With tension flaring high in the most recent hostilities in the Nogorno-Karabakh region, most political analysts have warned of the issue resulting in a 'regional war' in case of no ceasefire. As South Caucasus expert Laurence Broers writes in his BBC article, "In scale and scope, the fighting that broke out on Sunday surpasses the periodic escalations of recent years, involving heavy artillery, tanks, missiles and drones." Broers explains how the recent hostilities are worse than previous conflicts that the region has experienced. "Both sides appear to be digging in for a longer conflict. Azerbaijan has rejected renewed negotiations with Armenia, and unlike in previous escalations, it has a greater degree of Turkish support to count on. The danger is that a longer, protracted conflict will see increased involvement by outside powers, risking a wider regional war," writes Broers.

Thomas de Waal, an expert on the Caucasus region, on the other hand, explains how Turkey's open backing to Azerbaijan is the first factor that makes the recent conflict dangerous. The second factor, Waal explains is that of the United States' 'unusual disengagement'. The US has been, since 1998, one of the three co-chairs of the Minsk Group mediation effort (France and Russia being the other two). "Given that public expectations in both societies run extremely high, it will be harder for the leaders to stop soon and claim success. The risk of escalation and of mass destruction is alarmingly high," writes Waal.

While Russia informed that Armenia and Azerbaijan agreed to a ceasefire starting on October 10 midnight and hold 'substantive' talks, the truce failed to hold. A day after the truce, both the former Soviet Union nations accused each other of violating the ceasefire. According to reports, while Azerbaijan's top diplomat said that the truce never entered force, the Armenian military accused Azeri forces of shelling the area near Kapan that claimed a life. In response, Azerbaijan's defense ministry rejected the claims and called it as "provocation". In addition, the Azerbaijani forces accused Armenia of striking missiles in the Terter and Agdam regions and added that Armenia attempted to launch offensives in the Agdere-Terter and the Fizuli-Jabrail areas.

In fact, hours before the start of the ceasefire, the Azerbaijani Defence Ministry released footage showing airstrikes against alleged Armenian troops in Nagorno-Karabakh. On the other hand, Armenia accused Azerbaijan forces of "trying in every possible way to ensure an advantage over the beginning of a humanitarian truce."