Polish security forces were accused of using 'toxic chemicals' on the congregation of migrants. Dense smoke filled the air around the Bruzgi-Kuznica border. 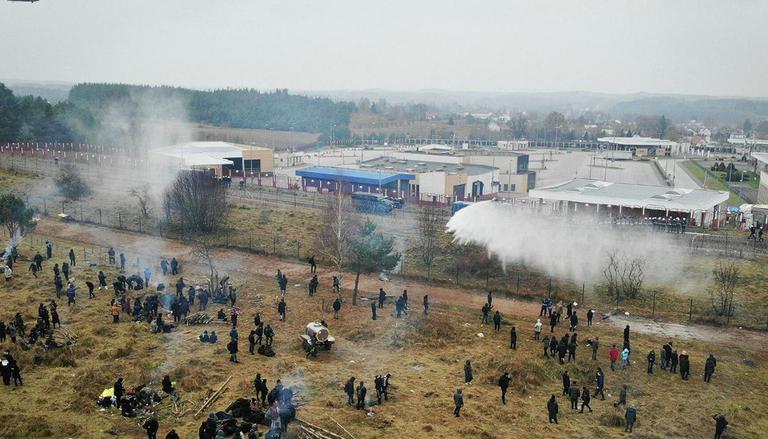 
As the migrant crisis along border of Poland and Belarus intensified, Polish security forces were accused of using 'toxic chemicals' on the congregation of migrants. Dense smoke filled the air around the Bruzgi-Kuznica border crossing as Polish forces sprayed water cannons and 'yellow liquid' that caused burns and suffocated asylum seekers attempting to forcefully cross into Poland, Belarusian state media BeITA reported. The incident came after the European Union (EU) agreed to step up sanctions on Belarus on Monday.

Videos of widespread disruptions were shared by the Polish Ministry of Defence (MOD), which showed migrants camped near checkpoints aggressively pelting stones and bricks at Polish security forces. One of the Polish soldiers was also hit with a stone on the face, Polish MOD wrote on Twitter. "To prevent illegal border crossings, water cannons were used against aggressive aliens,” the security agency wrote on Twitter, calling it a counter move to "attack by migrants". The Polish MOD also accused Belarus of "using children" to escalate cross-border violence and added that the Belarusian services also equipped migrants with "shock grenades." Additionally, Poland Security Forces spokesman Stanislaw Zaryn took to Twitter on Tuesday to share a video of Belarusian security officers appearing at the scene of violence and termed it as "a prelude to a propaganda campaign against Poland."

More recordings of the migrant attack repulsed today at the border crossing in # Kuźnica. The attackers were mostly young, aggressive men. https://t.co/lrTISx6Coa

"It’s highly likely that the Belarusian regime will accuse Poland of having committed an imaginary crime, presumably in relation to today’s events," Zaryn wrote in a subsequent tweet.

Today in the evening, a couple of Belarusian officers appeared at the scene where earlier today the foreigners had stormed the Polish border and attacked the Polish forces, incl. with stones.

The Belarusian “investigators” seemed to be securing the evidence . 1/2 pic.twitter.com/297x8AAQSM

EU steps up sanctions on Belarus

The European Union (EU) on Monday moved to step up existing sanctions on Belarus amid escalating tensions at the Polish-Belarusian border, fearing intervention from Moscow. Aiming to curb migrant influx along the eastern Polish borders, the EU announced that any airlines or officials involved in bringing migrants from their home country to Belarus will be punished. "Today's decision reflects the determination by the European Union to stand up to the instrumentalisation of migrants for political purposes. We are pushing back on this inhuman and illegal practice,'' EU foreign policy chief Josep Borrell said in a statement, as per DW.

For the unversed, thousands of migrants from mostly the Middle East and Asian countries have congregated at the Belarusian border with Poland, camping in freezing temperatures dwindling at the edge of humanitarian crisis without consistent food and water supply.