EXPLAINED: 'Polexit': What Is Happening In Poland? Is The EU In Crisis After Polish Court Ruling?

Poland is engulfed in ‘Polexit’ fears after unprecedented challenges were posed by its Prime Minister Mateusz Morawiecki to one of EU’s key legal principles. 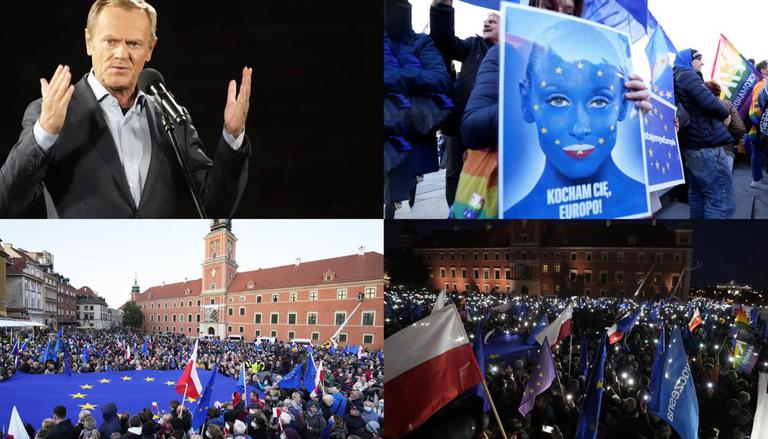 
Poland is engulfed in ‘Polexit’ fears after unprecedented challenges were posed by its Prime Minister Mateusz Morawiecki to one of the European Union’s (EU’s) key legal principles. This has massively escalated the ruling Polish government of the Law and Justice party’s (PiS) tiff with the 27-nation-bloc, triggering concerns that Poland is now heading towards an exit from the EU, described as ‘Polexit,' similar to how Britain's exit from the bloc was termed 'Brexit.'

On Sunday, 10 October, massive demonstrations were held across Poland in support of the country’s EU membership. The Sunday protests came after Poland’s constitutional court ruled this week that the Polish constitution overrides some of the EU laws. However, the critics of the right-wing nationalist government fear that the latest move challenging bloc’s rule could force Poland to leave the EU over an apparent rejection of the laws meant for all 27 member states.

On Sunday, thousands of people in Warsaw flooded the Castle Square in the historic centre, and as per The AP report, they chanted “We are staying!” The crowd was called out by Poland’s top opposition leader in the country and also a former EU leader, Donald Tusk in a bid to defend the nation’s membership in the 27-nation-bloc. He even expressed satisfaction at the massive turnout of the crowd for the demonstration.

It is imminent to note here that Poland’s ruling party leader Jaroslaw Kaczynski has been in conflict with Brussels for at least six years and his party has continued to advocate for more control over the country’s courts. But, the changes are viewed by the EU as an erosion of democratic checks and balances.

What is happening in Poland?

Poland is locked in a legal battle with the EU over the credibility of the judicial and constitutional reforms that are exerted by its conservative ruling party. Led by PiS, the Polish government has pushed for reforms overriding bloc’s laws that the administration has said are required to fight corruption. However, this triggered concerns that the expansion of government powers defy the democratic values which are upheld by Brussels.

The abortion rights in Poland were overturned by the government along with introducing a near-ban in January amid months-long violent protests.

On Thursday, 7 October, Poland’s Constitutional Tribunal ruled that the key articles of one of the EU’s primary treaties were incompatible with Polish law. In effect, the ruling rejected the principle that bloc’s law has primacy over national legislation in certain judicial areas.

Apart from the country’s own rulings, Poland even joined Hungary in blocking the EU’s €1.8 trillion budget and pandemic recovery fund. As per Politico, both nations did it because the budget includes a mechanism that would link the bloc’s money with the rule of law.

Why is EU membership important in Poland?

Reportedly, EU membership for Poland is deemed essential as only by getting itself included in the 27-member-bloc, the country got the freedom to travel. EU membership also brought about significant economic transformation for Poland especially after it suffered hardships under decades of communist rule until 1989. Poland has been an EU member since 1 May 2004 under the Accession Treaty which was signed in Athens on 16 April 2003.

While speaking to the crowd on Sunday, Tusk, while referring to the Thursday ruling, said that a “pseudo court, a group of people dressed in judge’s gowns and on the order of the party’s leader, in violation of the Polish constitution, decided to lead our homeland out of the EU.”

“After all, we know very well why they want to leave the European Union, in fact in order to violate citizens’ rights with impunity, to violate democratic principles and to steal without restraint,” Tusk said, as per AP.

What has EU, other members have said?

In the wake of the recent developments, the European Commission, as per BBC, has warned that the bloc would use all its powers against Poland. Meanwhile, European Commission President, Ursula von der Leyen has said, “Our utmost priority is to ensure the rights of Polish citizens are protected and that Polish citizens enjoy the benefits granted by the membership of the European Union.”

The Commission has said that the changes introduced in Poland have undermined judicial independence and even opened the courts for political interference. In the wave of PiS reforms, the country’s Constitutional Tribunal was the first target as it is reportedly now dominant with judges who are sympathetic to the party. As per the report, the European Court of Human Rights has stated that one of those judges in Poland was appointed illegally.

Meanwhile, France has reportedly said that Poland’s exit from the EU or ‘Polexit’ is now a “de facto risk.” On Friday, French and German Foreign Ministers denounced Poland and said that the bloc’s membership is relied upon “complete and unconditional adherence to common values and rules" and this was "not simply a moral commitment. It is also a legal commitment.”

As per Politico, Poland’s exit from the European Union (EU) or Polexit is possible for several reasons. Firstly, the values of the country are not coinciding with several other EU nations as PiS leader Jaroslaw Kaczynski stated while objecting to the EU budget that agreeing to rule of law conditions would be a “loss of sovereignty for our country.” This means, the tussle between Poland and the EU is mainly over values and not policies.

Secondly, among some supporters of the ruling party in the government, anti-EU sentiment is brewing. Polish PM has said, “We say a loud ‘Yes’ to the European Union and say a loud ‘No’ to oppressive mechanisms.” In another speech to the Polish parliament, he defended the action by his government against the budgetary veto and likened the EU to Poland’s previous communist regime.

Even Poland’s Education Minister Przemysław Czarnek, as per Politico, lashed out after European Parliament ‘chastised’ Poland for changing abortion rule. He told Polish television, “In Europe, we’ve reached a level worse than the Soviet Union and communism.”

However, there are some lawmakers in Poland who have called Polexit “absurd.” Zbigniew Rau, Poland’s minister of foreign affairs said, “Polexit is absolutely absurd. No important political group … has ever formulated such a demand.” The opposition parties in Poland have warned that even though PiS might not plan on leaving the bloc, its actions are directing the country towards Polexit.