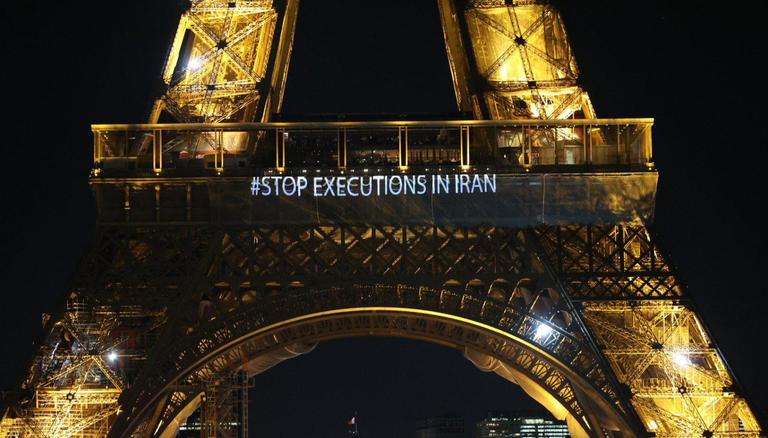 
France’s historical landmark the Eiffel Tower glimmered with lights and strong messages on Monday, displaying slogans such as "Femme, Vie, Liberte" in the wake of the unrest in Iran. The slogan, which translates to "Women, Life, Freedom,” showed up at the beaming tower as the Iranian regime carries out executions of several protesters who participated in anti-hijab demonstrations following the death of 22-year-old Kurdish woman Mahsa Amini last year in September.

Videos circulating on social media display the Eiffel Tower shining bright at night, with the slogans being the key focus of the attraction. Reacting to it, one Twitter user wrote, “Brave women of Iran. Fighting for themselves and women oppressed all over.” Sharing pictures of the sparkly scene, Paris Mayor Anne Hidalgo wrote on Twitter: “Four months after the assassination of Mahsa Jîna Amini, @LaTourEiffel displays @Paris 's unfailing support for Iranians fighting for their rights and freedom. For the executions to cease and the will of the Iranian people to triumph!”

Paris City Hall said in a previous statement that the slogans “Woman. Life. Freedom." and “#StopExecutionsInIran” will be shown on the Eiffel Tower on the evenings of Monday and Tuesday to mark the four-month death anniversary of Amini and a “homage to those who are bravely fighting for their freedom as the (Iranian) regime is continuing executions of protesters."

On Monday, several activists gathered for a march near the EU Parliament in the French city of Strasbourg to voice support for the people of Iran and pay tribute to Amini. According to the Associated Press, the march comes after more than 100 members of the European Parliament signed a letter last week to urge the European Union to have a stricter stance against the Iranian regime.

The letter, which was addressed to EU's High Representative for Foreign Affairs Josep Borrell, urged the bloc to identify Iran’s Islamic Revolutionary Guard Corps “in its entirety as a terrorist organization,” something that the United States already did in 2019.