While taking to Twitter, the Indian Army on August 2 informed that Indian soldiers have arrived in Russia for the Indra-2021 drills in the Volgograd Region. 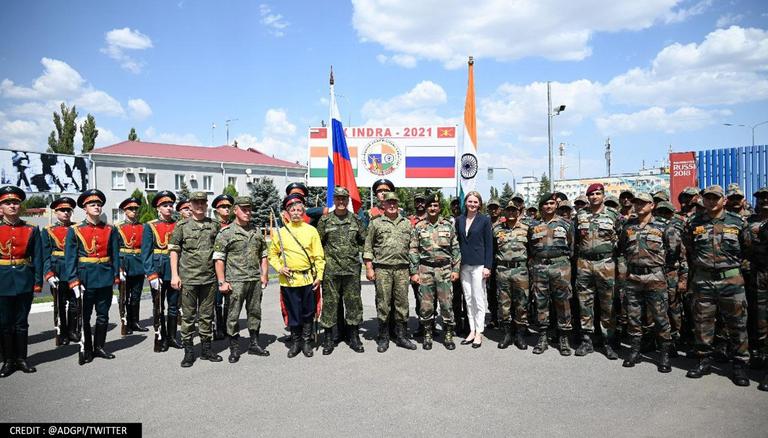 
The Indian Army on August 2 informed that Indian soldiers have arrived in Russia for the Indra-2021 drills in the Volgograd Region. While taking to Twitter, the Indian Army shared two images of the soldiers and said that they received a “warm welcome” from the Russian Military Band upon arrival. Now, India and Russia will carry out a 13-day mega military exercise with a focus on counter-terror operations in the Russian city of Volgograd.

According to ANI, spokesperson for the Russian Southern Military District (SMD), Vadim Astafyev, announced the arrival of the Indian contingent said, “at the Gumrak airport, Volgograd, a group of 250 soldiers of the Indian armed forces arrived to take part in the Indra-2021 international exercise.

Upon arrival, the Indian soldiers headed to the field camp located at the SMD Prudboy ground in the Volgograd Region. It is worth noting that Indra-2021 will run from August 1-13 and involve 250 soldiers from motor-rifle, tank and artillery divisions. The exercises will also involve Russian intelligence troops as well as 250 Indian soldiers. Additionally, more than 100 units of military hardware will be used in the drills with a focus on counterterrorism.

Previously, the Indian Army had said that the 12th edition of the ‘Indra’ exercise will be yet another “milestone” in strengthening the bilateral security cooperation and will serve to reinforce the longstanding bond of friendship between India and Russia. It also said that the exercise will entail the conduct of counter-terror operations mandated under the UN’s framework of joint forces against international terror groups. Further, the Indian Army contingent participating in the exercise will comprise a mechanised infantry battalion.

Meanwhile, both Indian and Russian Defence Ministers meet every year alternatively in each country to discuss and review the present status of the ongoing projects. The Indra-21 exercise enshrines upon the interests of both governments to increase cooperation in regards to research and development, production and after-sales support of arms systems and military equipment, as per reports.

WE RECOMMEND
Why is Russia banned from the Olympics? How they compete with name ROC, what is it?
Russia warns of ISIS fighters in Afghanistan; beefs up military base in Tajikistan
Russia can detect 'any enemy' and can 'carry out unpreventable strike' if needed: Putin
India, Russia to conduct 13-day joint military exercise INDRA-21 at Volgograd from Aug 1
Russia Nauka lab module docks with International Space Station after repeated delay