Several members of the Afghan community in Italy staged a protest against Pakistan's government and army for wreaking havoc in Afghanistan. 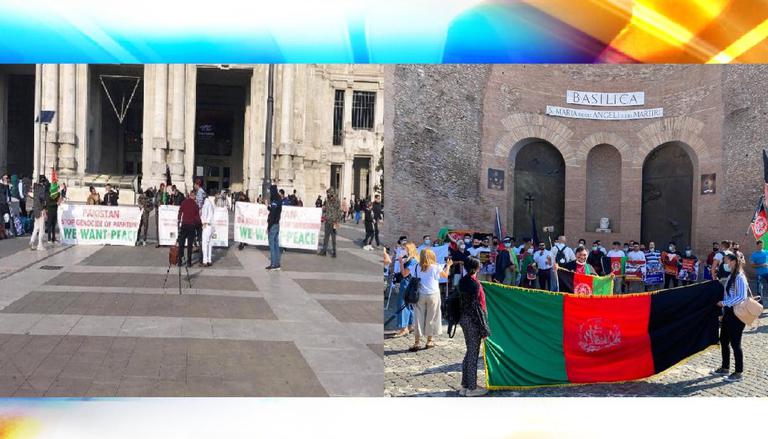 
On Sunday, October 24, several members of the Afghan community in Italy, led by president Kaihan Mashriqwal, staged a protest against Pakistan's government and army for wreaking havoc in Afghanistan. The protest, which took place at Milan Central Railway Station, drew a total of 35 members of the community. Apart from president Mashriqwal, two other members - Jamali and Masood Shiraz - addressed the crowd and blamed Pakistan's army, as well as the Taliban and other Mujahideen for creating a chaotic situation in the war-ravaged country.  Protesters shouted anti-Pakistan slogans and held placards denouncing Pakistan as former "Qabaliyis today's Taliban" and "Sanction Pakistan," among other things, reported ANI.

Various issues concerning women's and children's human rights, education, health, and Talibanization of young people were discussed during the gathering. Members of the community also pledged to continue protesting against the Taliban until their country is governed by a democratically elected government. They also compared the hardship of Afghans to that of Bangladeshis during the Pakistan Army's 1971 invasion of the country. Earlier in August, an anti-Taliban demonstration had taken place at Republica Square in the heart of Rome. Around 100 individuals had attended the event, including Afghan expats from the Pashtun, Uzbek, and Tajik communities. Several Italians and members of the media also attended the rally to demonstrate their support for Afghan citizens.

'The old government's collapse was not in people's interest'

Meanwhile, On Sunday, October 24,  the Taliban admitted for the first time that the old government's (Islamic Republic of Afghanistan) collapse was not in the people's best interests and that it was not well planned. Deputy Minister of Information and Culture, Zabiullah Mujahid made the remarks in a special interview with Tolo News. "It has harmed Afghanistan, in my opinion, because if the war had ended and we had reached a serious agreement, the situation would have been better and different than it is now. As a result, the country's institutions would not have collapsed, and people would not have fled " he was quoted as saying by the outlet.

Mujahid added that the situation would have been far better now if peace efforts between the two Afghan factions had continued and resulted at the end of the country's war. He went on to say that changes to the current interim cabinet are feasible because the door for future talks has remained open, reported Tolo News. It should be mentioned here that the US has refused to release Afghanistan's frozen assets but stated that it is committed to providing humanitarian help to Afghan nationals and that the Taliban must assist in the distribution process. Due to its extensive violations of human rights and inability to build an inclusive administration, the international community has refused to recognise the Taliban-led government.

READ | Afghanistan: 17 people killed in conflict between Taliban and armed group in Herat