US President Joe Biden and his Russian counterpart Vladimir Putin will hold their June 16 summit in an 18th-century Swiss villa that overlooks Lake Geneva. 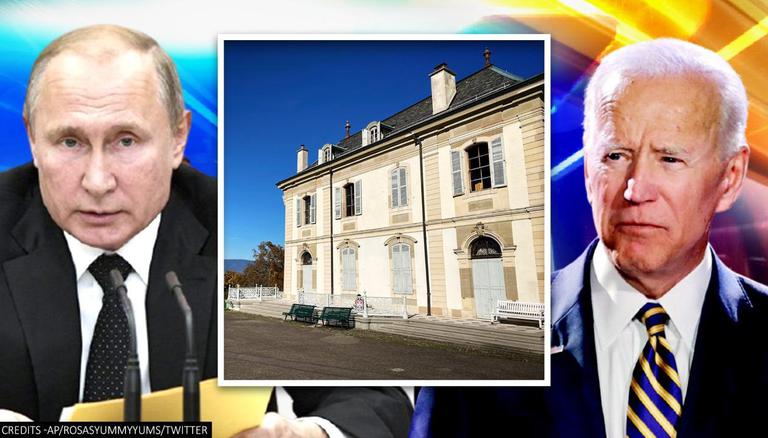 
US President Joe Biden and his Russian counterpart Vladimir Putin will hold their June 16 summit reportedly in an 18th-century Swiss villa that overlooks Lake Geneva. Even though the talks between both the leaders are widely expected to be heated, the site of the meet which is the Villa La Grange, appeared to be a soothing setting, reported several media outlets. Biden has embarked on his first overseas trip in his presidency and he has a jam-packed schedule for the upcoming eight days which would end with him meeting the Russian President. However, he got off to an inauspicious start because of cicadas while boarding Air Force One to reach the UK.

Firstly, Biden will meet with UK Prime Minister Boris Johnson to discuss the US-UK ties followed by US President and First Lady Jill Biden meeting with Queen Elizabeth II at Windsor Castle on Sunday (local time). He and Putin will meet on June 16 for a trip-ending summit where the leaders are expected to discuss high-stakes topics including cyberattacks in the US linked to Russia among others. Before that, the US President is expected to rally allies through the UK, the European Union (EU) and the NATO summit.

Biden-Putin summit is expected to register several bitter disputes between both nations including cyberattacks, human rights, the Ukrainian front. It is also the first first-to-face meeting between both leaders with strategic nuclear stability and regional conflicts also being a part of the discussions, US President has already said that he would corner his Russian counterpart to regard human rights. Even though he said he expects no breakthrough in talks, Biden said that he expected talks to be held in a positive atmosphere.

‘Watch out for the cicadas’

While all eyes were on Biden for his first foreign trip since taking over the US presidency on January 20, he was attacked by a cicada before getting on Air Force One on June 9. As per the Associated Press report, the trip was delayed for as long as seven hours after the chartered plane was overrun by cicadas. With insects flying around, Biden also told the reporters, “Watch out for the cicadas...I just got one. It just got me.”

US President was seen brushing a cicada from the back of his neck when he was chatting with his Air Force greeter after arriving at Joint Base Andrews for the flight on Wednesday. The Washington DC area is one among the several parts of the country that have been swarmed by Brood X cicadas. There is a large emergence of the noisy 17-year insects that take to dive-bombing onto moving vehicles and passersby.

After arriving at Joint Base Andrews for Wednesday’s flight, Joe Biden brushed a cicada from the back of his neck as he spoke with his Air Force greeter.

“Watch out for the cicadas,” Biden then told reporters. “I just got one. It got me.”https://t.co/TdfdOqAF3Y pic.twitter.com/QTg8jcJwG6