Moria Migrants: Germany Plans To Take In 1,500 Migrants From Greece After Fire

Germany announced that it will take in at least 1,500 migrants from the Greek island of Lebos after a devastating fire last week ravaged Moria migrant camps

On Tuesday, September 15 Germany announced that it will take in at least 1,500 migrants from the Greek island of Lebos after a devastating fire last week left thousands without shelter at Moria camp. As per reports, Germany will primarily be taking families, especially those with children, and plans to take in more refugees from other parts of Greece as well.

German Finance Minister Olaf Scholz tweeted Germany’s decision to take in refugees on Tuesday. He also said that German authorities were striving for a European aid effort for the refugees wherein the country would take in additional migrants who are in need of protection. 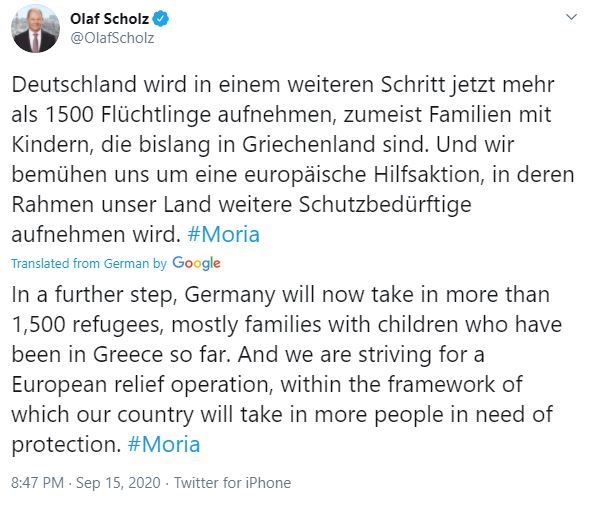 On September 13, thousands of asylum seekers at Greece’s largest migrant camp at Lebos island were left without shelter after a devastating fire ravaged the Moria camp. After facing severe criticism, authorities moved to action to provide temporary shelters for the thousands of migrants.

Greek Prime Minister Kyriakos Mitsotakis has raised suspicion that some of the camp residents could responsible for setting the fire in an effort to blackmail the Greek government into moving them out of the island.

The United Nations’ refugee agency has set up a temporary camp wherein 100 migrants have already moved in, simultaneously Greek authorities have also constructed a new tent city on the island that will be able to receive as many as 1,000 Moria migrants. Those entering the camp will also go through COVID-19 testing;  so far, at least 5 new cases have already been identified among the migrants.

Moria migrant camp was set up back in 2015-16 and was constituted to handle the massive wave of migration into Europe. The camp is currently occupied by people fleeing war and poverty in the Middle East, Africa, and Asia and was originally designed to house 2,750 people.