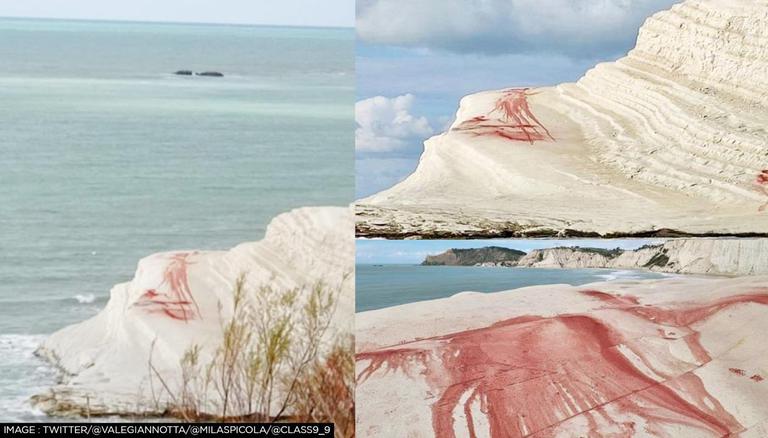 
Police in Italy have launched an investigation into the vandalisation of the landmark tourist spot in southern Sicily called the ‘Scala Dei Turchi’, or ‘Stair of the Turks’. The popular white marl cliffs on the coast of Realmonte were defaced with red paint and plaster dust by the vandals, Italian newspaper Corriere Di Sicily reported. The Prosecutor's Office of Agrigento announced that it has launched a manhunt for those behind the damage of the Italian assets having landscape value.

Chief Luigi Patronaggio told the paper that he lodged an official complaint and has been inspecting the images and the video acquired from the surveillance system. The Italian police are also examining the material used to deface the popular tourist attraction and are trying to find the sales and the list of buyers. Italy’s ‘Scala Dei Turchi’ is a set of a huge staircase jutting into the Mediterranean from the coast of Realmonte in southern Sicily and is mentioned in some of the popular Italian novels and notable authors.

A group of young volunteers is trying to whitening back the "Scala dei Turchi" (Turkish Steps), after the vandalism. When common sense, sharing & love for the beauty prevails ❤️🙌💪✨#ScaladeiTurchi https://t.co/qBcC9T3069 pic.twitter.com/l5aopivC7z

The police found that some perpetrators defaced the cliff with red iron oxide powder, which may not be so difficult to remove. The Volunteers in Realmonte on Saturday started the work of removing the red powder and restoring the beauty of the site. Scala Dei Turchi has also been a one-time entry for Unesco's world heritage status in 2019. In 2020, though, due to its poor preservation, the government had closed the site for its preservation as the cliff had suffered natural erosion. Tourists had also earlier stolen the rocks from the cliff that is said to contain the soft white limestone.

Are we joking????? Deface and thus ruin the milestone of Sicily, Scala dei Turchi? Here only one measure is needed to eradicate bitchy people and empty pumpkins without souls, feelings and respect for people and places. lock them up for life and throw away the key pic.twitter.com/3FtVvYtN6t

“The splendid white marl cliff of the Scala Dei Turchi, an attraction of the Agrigento area for visitors from all over the world, has been shamefully defaced,” said Nello Musumeci, Sicily’s president on social media. “We condemn the perpetrators of this cowardly gesture. It constitutes an outrage not only to an asset of rare beauty but also to the image of our island. I hope the judiciary quickly identifies those responsible.” Twitter expressed outrage at the vandalism, as one wrote: “ What is happening in Italy: discontent; vandalism; lack of ethics. The national heritage & natural reserve of "Scala Dei Turchi" (Turkish steps) has just been damaged by the red painting by unknowns. Such a huge shame!”