On Poland's eastern border, we are dealing with a new type of war, a war in which migrants are weapons, Poland's Prime Minister Morawiecki said. 
Poland on Sunday accused Belarus of using the migrants as a political bargaining chip and weaponry against the bloc ahead of talks with the EU with the "back-room support" of Russian President Putin. Condemning the spillover of the migrant at the border unfolding a full-fledged crisis, Polish Prime Minister Mateusz Morawiecki yesterday lambasted Belarus's authoritarian leader Lukashenko of “gangster-style abuse” alleging that he allured the refugees with the false promise of easy entry to the EU, European press reported.

The refugee cataclysm has been orchestrated by Minsk, as at least 2,000 migrants are now stranded at the Belarusian border with Poland with nowhere to go. "Upon arrival, they are being pushed to the border and forced to make an illegal entry into the European Union," Commission spokesman Peter Stano had told the ground reporters for the British Broadcasting Corp earlier. 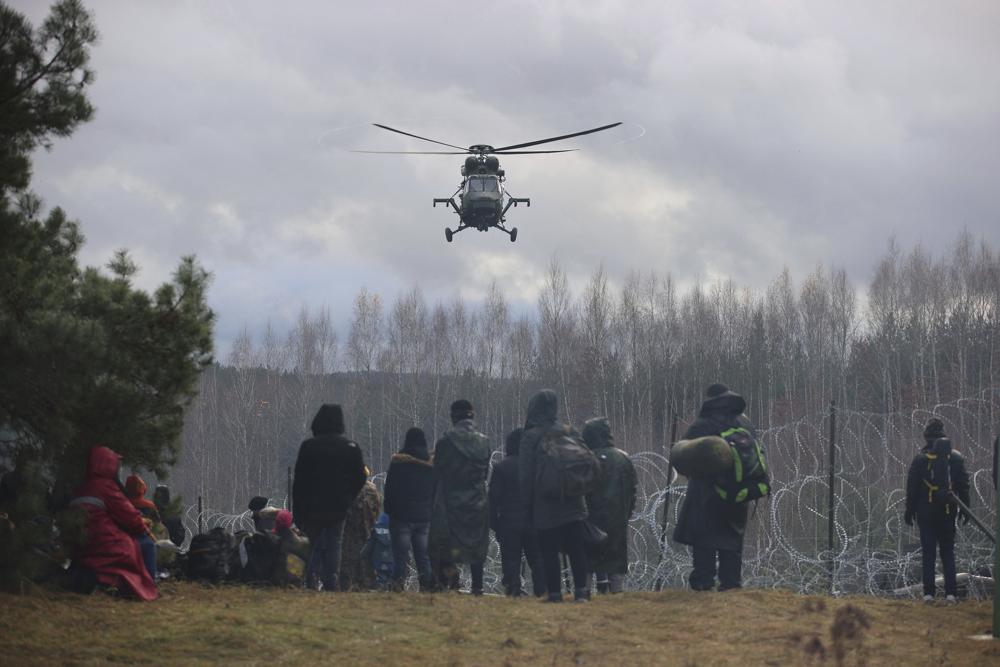 A Polish military helicopter fly over a group of migrants from the Middle East and elsewhere gathering at the Belarus-Poland border near Grodno, Belarus. Credit: AP 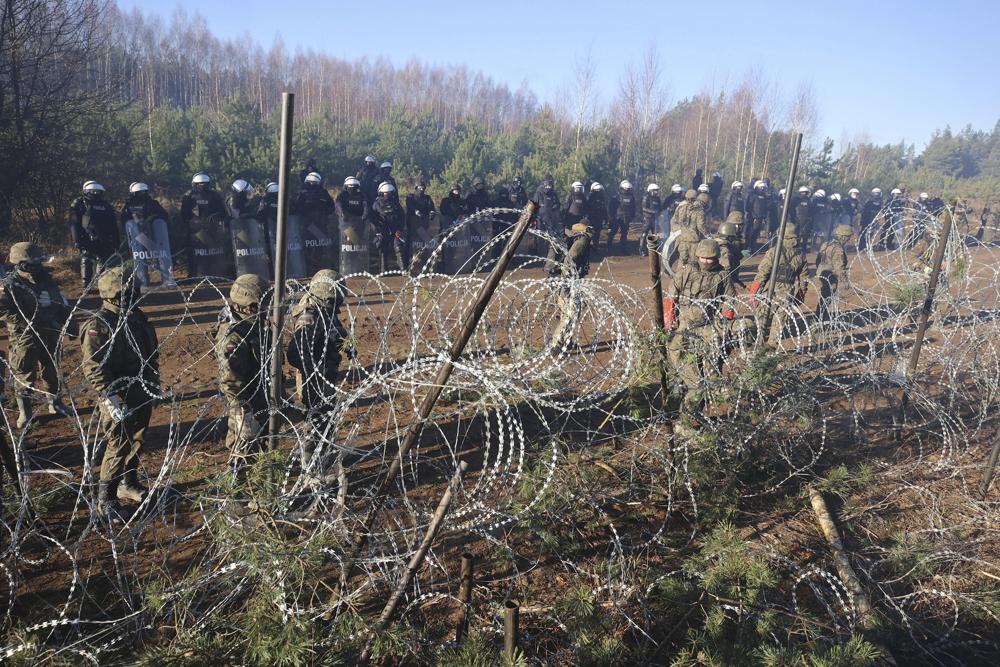 EU and NATO members Poland, Lithuania, and Latvia have witnessed a drastic surge of the Mideast nationals migrating towards the bloc and trying to illegally enter the EU from Belarus in recent years, particularly via the border crossing at Kuznica. Time and again migrants suffering at the border have claimed that the Belarusian authorities coerced them towards Poland’s side, seized their phones, and often pushed them towards the EU borders in an effort to destabilize them and the European Union.

As he prepares to meet with EU leaders later in the day, Morawiecki warned at a presser: "Today, on Poland's eastern border, we are dealing with a new type of war, a war in which migrants are weapons, in which disinformation is a weapon.” Belarusian servicemen control the situation while migrants get humanitarian aid as they gather at the Belarus-Poland border near Grodno. Credit: AP

Tensions with Brussels over breach of bloc's 'democratic principles'

Polish leader lamented that Warsaw was not only facing a terrible migrant crisis at the border but also, tensions have heightened with Brussels over breach of bloc's democratic principles. Belarusian leader Alexander Lukashenko "launched a hybrid war against the EU. This is [the] greatest attempt to destabilize Europe in 30 years," Morawiecki, meanwhile, said on Twitter making reference to the Cold War era. 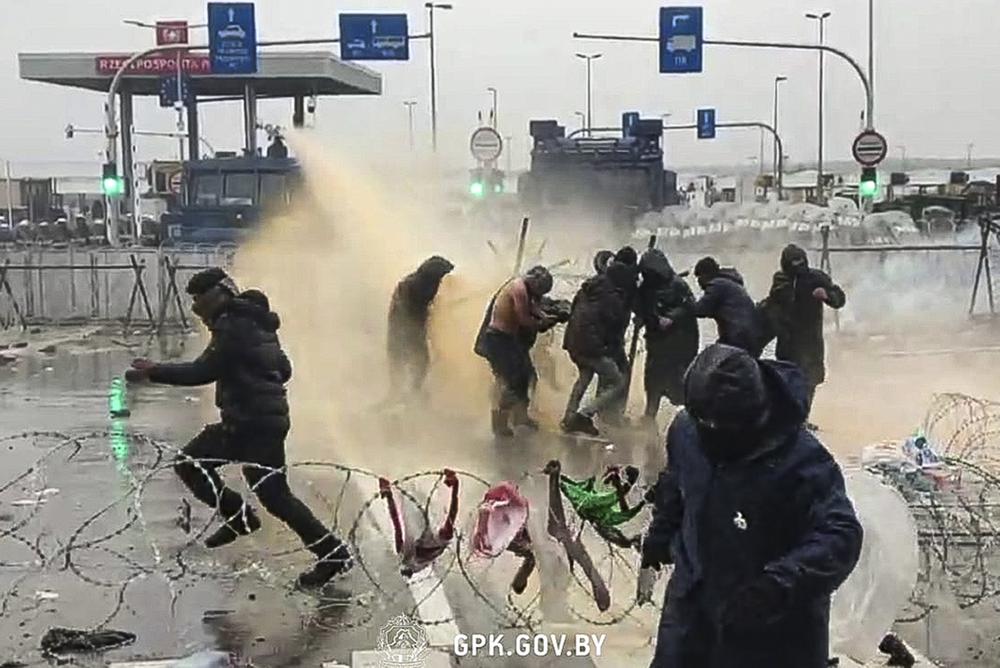 Photo released by State Border Committee of the Republic of Belarus shows Polish servicemen use a water cannon during clashes with migrants. Credit: AP

"Poland will not yield to blackmail and will do everything to defend the EU's borders,” he went on to assert in his video statement. The leader further warned that today Poland has been suffering at the hands of the Belarusian regime, next it would be Germany, Belgium, France, or Spain.

Morawiecki’s remarks came as over 100 “very aggressive” migrants attempted to enter Poland with coercion. They were brought to the border by Belarusian soldiers, and Poland’s security forces prevented this," a  Polish border guard told DW earlier yesterday. He shockingly revealed that the migrants had spent “thousands of dollars” to fly into Belarus on tourist visas, to face the freezing condition, and spew havoc on the EU border, “only to be pushed back into Belarus by Polish authorities.” 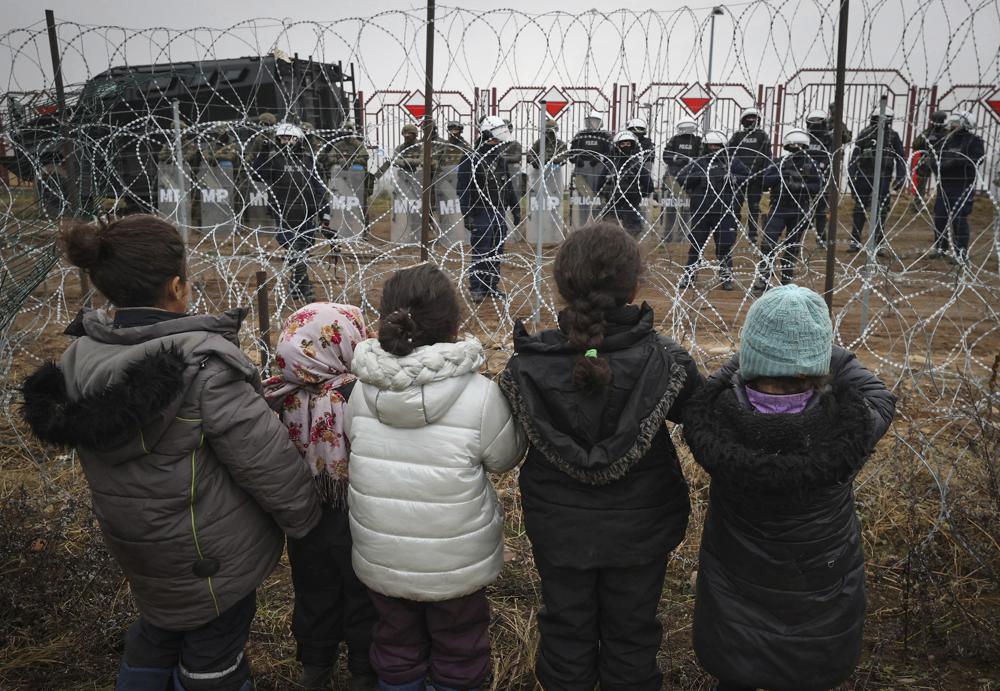 Migrants children stand in front of a barbed wire fence and Polish servicemen at the checkpoint "Kuznitsa". Credit: AP