Accepting the invitation from Prime Minister Modi as they met at the Vatican on Saturday, Pope Francis said that he is looking forward to visiting India. 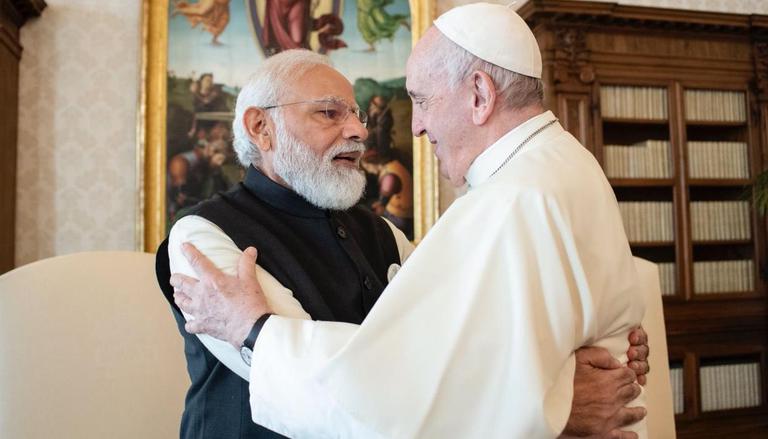 As Pope Francis met PM Modi in the Vatican City, the interaction that was scheduled for just twenty minutes lasted for about an hour as the two indulged in conversations on a gamut of issues starting from poverty to climate change. The conversation was aimed at making the world a better place to live.

PM Modi's meet with Pope Francis has been lauded by the Christian community. Speaking exclusively to Republic Media Network, Father Shankar, spokesperson of Archdiocese of Delhi called it 'great news'. "It's great news not just for the Christian community but for the whole of India," he said, adding that when two great leaders meet something significant happens.

Speaking of Pope Francis' visit to India, the spokesperson of the Archdiocese of Delhi said, "We look forward this visit. It will show the world that despite religious differences how we (Indians) live together as one family."

PM Modi along with other world leaders have gathered to take part in the G20 Summit which this time is taking place in Rome, Italy. The Summit, which is scheduled for October 30-31, will be centered around the theme 'People, Planet, Prosperity, focussing on the areas of recovery from the pandemic and strengthening of global health governance.

On the sidelines of the G20 Summit, Prime Minister Narendra Modi on Saturday met world leaders, including US President Joe Biden and French President Emmanuel Macron. UK Prime Minister Boris Johnson and Canada's Prime Minister Justin Trudeau were also spotted, as PM Modi was seen exchanging pleasantries and in one picture, even appearing to receive a salute from the UK PM.

In one of the pictures shared by the Prime Minister's Office, Narendra Modi is seen walking with Biden in a half embrace, apparently sharing light chitchat. The two leaders are seen happy to be in each other's company. In other photos, PM Modi is seen embracing Macron and engaging in a discussion with Trudeau and Johnson.

On the sidelines of the @g20org Rome Summit, PM @narendramodi interacts with various leaders. pic.twitter.com/7L3vbpRzUs

Following the conclusion of the G20 Summit on October 31, PM Modi will depart for Glasgow to attend the 26th Conference of Parties (COP-26) to the United Nations Framework Convention on Climate Change (UNFCCC) where he will be participating in the high-level segment of COP-26 titled ‘World Leaders’ Summit’ (WLS).