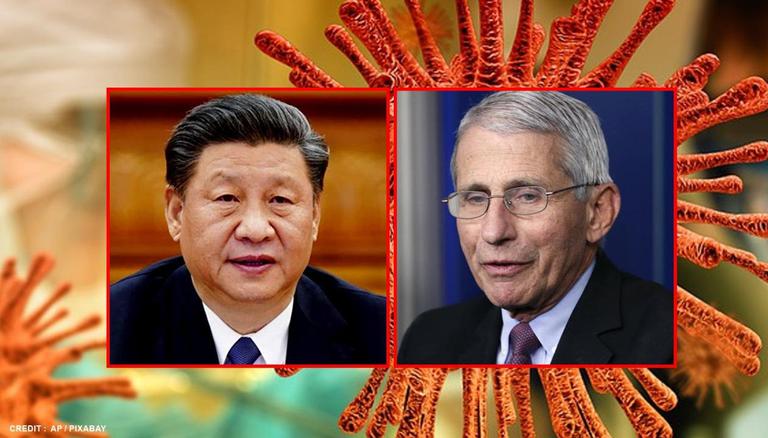 
As questions continue to be raised over the origins of the COVID-19 pandemic, Chief Medical Advisor to the US President Dr Anthony Fauci has now surprisingly joined the chorus of demanding a deeper probe into whether the SARS-CoV-2, the virus which causes COVID-19, was developed in a lab in China. Fauci, who is America's top infectious diseases expert, has downplayed the probe conducted by the World Health Organisation (WHO) and called for the investigation to unfold the reality behind what was happening in China. Interestingly, Dr Fauci had earlier shunned the argument that the SARS-CoV-2 virus was genetically developed in a lab and had escaped by mistake, terming it just as one of the plenty other theories.

Fauci's call to continue the probe into the origins of the deadly virus come at a time when a report by the Republicans' House Permanent Select Committee on Intelligence has suggested that the Wuhan Institute of Virology (WIV) had been studying the virus sample, closest to the SARS-CoV-2 virus since 2016 nad had been conducting several dangerous experiments. The same report also raises questions about the NIAID, headed by Dr Fauci, in funding the research at the Wuhan lab.

In a recent interview with PolitiFact, Dr Fauci discredits the theory that the SARS-CoV-2 has developed naturally and that it made a jump from bats to humans in a wet market, as claimed. The top medical expert said that he is not convinced with the claims and that the investigation in China should continue. Maintaining that the notion that the Coronavirus emerged from an animal reservoir is a popular one, Fauci in the interview that was aired on May 12, has said that he is 'personally in favour' of any investigation that looks into the origins of the virus.

READ | If COVID is natural, China must prove it: Nicholas Wade asks scientists to demand evidence

On being asked if he believes that the COVID-19 had developed naturally, Dr Fauci said, "I am not convinced. I think we should continue to investigate what went on in China until we find out what happened to the best of our ability.  Certainly, the people who have investigated it have said that it emerged from an animal reservoir, that then infected individuals but it could have been something else. We need to find that out. I am personally in favour of any investigation that looks into the origin of the virus."

In the same interview, Dr Fauci also downplays the questions raised over NIAID's funding of the research on Coronaviruses in China. Attempting to sway off the accusations laid, Dr Fauci argued that the research was necessary as the world had just escaped a pandemic fortunately after the SARS-CoV-1 was identified in China. Adding that it was SARS-coV-1 that fuelled the idea to fund the research, Fauci maintained that the argument that he and the NIAID were involved in creating the virus is 'ridiculous'.

Pertinently, the WHO team composed of 17 international experts concluded its probe into the origins of COVID-19 after a four-week visit to China earlier this year. In its report, the WHO team said that it was “extremely unlikely” COVID-19 sprang from a lab leak. Moreover, the WHO delegation said that it was 'likely to very likely' that the virus was introduced among humans through an intermediate host, and that it was 'possible-to-likely' that the virus was transmitted to humans from animals.

Shortly before Dr Fauci himself became embroiled as a potential player in the debate over the possible origins of COVID-19, in March, in response to the views of former US-CDC director Robert Redfield (a Trump appointee) who espoused the idea that the virus was created in a lab and then escaped possibly by mistake, Fauci had said that it was only one of several theories.

As per reports, Dr Fauci analysed the lab-escape theory being founded on the finding that the COVID-19 virus was already well adapted to infecting humans when it was first identified in earnest in late December 2019. However, he argued that by that time the virus had already actually been in circulation for a number of weeks and this was plenty of time to adapt itself for humans.

The 21-page unclassified report by the Republicans' House Permanent Select Committee on Intelligence speaks in detail about dangerous experiments being conducted at the Wuhan Institute of Virology (WIV) since 2016, warnings of which had been relayed by the US envoys in China. The report also questions the role of an American institute (NIAID) headed by top medical expert Dr. Anthony Fauci which allegedly funded labs in Wuhan to carry out research on Coronaviruses.

The committee, which has been examining the growing threat to America posed by the CCP and the Chinese PLA, accuses the Chinese authorities of undermining the investigation into the origins of the COVID-19. Giving a brief timeline of the events, the Republican report has claimed that Wuhan Institute of Virology researchers had been conducting experiments since 2016 which involved RaTG13, the bat coronavirus identified by the WIV in January 2020 as the closest sample to the SARS-CoV-2 virus.