All the things you need to know about Osama bin Laden's son & Global Terrorist - Hamza bin Laden. He was declared dead by the USA government on Saturday.

Global Terrorist Hamza bin Laden was declared dead by the USA government on Saturday. While the speculations of Hamza bin Laden’s death have been making rounds since August, President Donald Trump announced that the heir to Al –Qaeda was killed near Afghanistan/Pakistan region in a US counterterrorism operation. President Trump in a press statement said that, “The loss of Hamza bin Ladin not only deprives al-Qa’ida of important leadership skills and the symbolic connection to his father but undermines important operational activities of the group. Hamza bin Laden was responsible for planning and dealing with various terrorist groups.”

The son of executed terrorist Osama bin Laden, Hamza, was believed to be born to one of Osama’s three wives, Khairiah Sabar of Saudi Arabia. While he spent his childhood in Jeddah for a short while, he is thought to have stayed with his mother in Iran for a long time. Believed to be around 30 years of age at the time of his death, Hamza was only a child when his father plotted the 9\11 attacks. According to media reports, the US State Department said that Hamza was married to the daughter of Abdullah Ahmed Abdullah, or Abu Muhammad al-Masri, who was allegedly involved in the 1998 bombings of the US embassies in Tanzania and Kenya. Hamza was absent from Abbottabad compound in Pakistan, during the assassination of Osama bin Laden.

Declared as a 'Specially Designated Global Terrorist' by the USA in January 2017, Hamza bin Laden was classified for being associated with ISIL or Al-Qaida for “participating in the financing, planning, facilitating, preparing, or perpetrating of acts or activities by, in conjunction with, under the name of, on behalf of, or in support of” and “recruiting for”, and “otherwise supporting acts or activities or indicating association with” by the United Nations Security Council on February 28, 2019. As per UNSC reports, in 2015, bin Laden called for attacks against U.S., French, and Israeli interests and he also called for acts of terrorism in western capitals on behalf of Al-Qaida. In 2016, Al-Qaida issued an audio message from Hamza bin Laden threatening revenge against the United States and warned the Americans that they would be targeted in the United States and abroad. Additionally, in 2016, bin Laden also called on Saudi Arabian-based tribes to unite with Al-Qaida’s affiliate in Yemen to wage war against the Kingdom of Saudi Arabia.

In May 2017, bin Laden released an audio message, on behalf of Al-Qaida, calling on followers to conduct attacks. And lastly in January 2018, bin Laden released a video, also on behalf of Al-Qaida, denouncing Saudi Arabia and calling for the overthrow of the monarchy in an effort to recruit viewers to Al-Qaida. Apart from all of this, he was implicated for the assassination of former Pakistani Prime Minister Benazir Bhutto. A wanted poster was released by the U.S. Department of State Rewards for Justice program showing Hamza bin Laden. Also, a $1 million reward was issued by the US on the information of Hamza bin Laden’s location or movement. 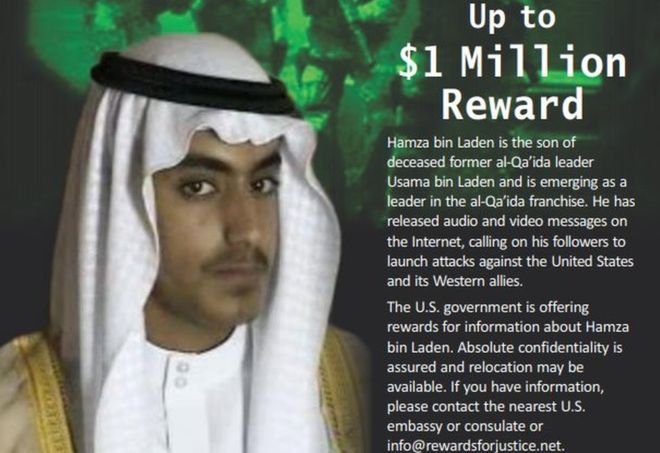