Protests erupted in Sukkur city of Sindh province after a six-year-old girl reportedly died due to starvation and illness at a makeshift shelter. 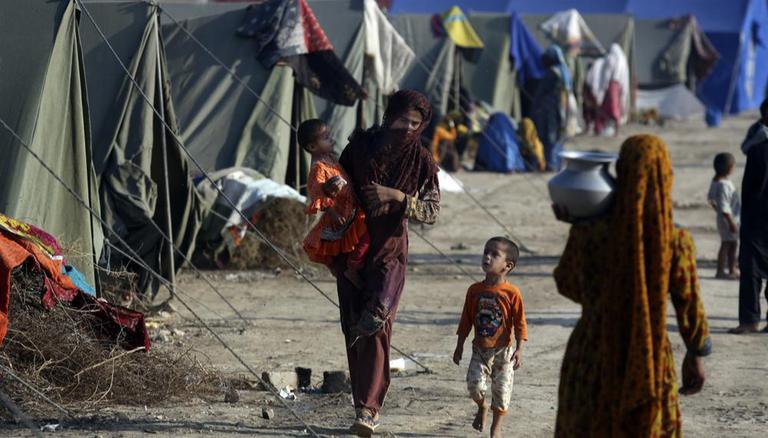 
Protests erupted in Sukkur city of Sindh province after a six-year-old girl reportedly died due to starvation and illness at a makeshift shelter near a filling station on the national highway in the Patni region on Friday. Around 200-flood affected families protested in Sukkur city of Pakistan. Protesters claimed that the six-year-old died as the Rohri mukhtiarkar were not able to "provide them food and other relief goods in time," Dawn reported.

Khalid Khuso, the girl's father stated that they had visited the mukhtiarkar's office in Rohri for aid but they were not provided with food and tents. He further said that his six-year-old daughter Razia died due to "starvation and disease." Protesters have said that they were waiting for official aid after they arrived in Sukkur from the Jacobabad district as rains had destroyed all their belongings. Protesters said that the officials came to gather data but did not provide any relief material. Furthermore, they said that the medical team did not come to check on the health of children and women, who were facing health issues after the rains.

"When our children started starving, we went to the mukhtiarkar's office in Rohri for aid but we received neither food nor tents. In the meanwhile, my six-year-old daughter Razia died of starvation and disease," said the girl's father Khalid Khoso.

Protesters have said, "The officials came only to collect data but neither of them sent any relief items such as food, tents, mosquito nets and other necessary goods so that we could feed our starving children and protect their families against diseases." Protesters stated that local people and former members of Khoso Ittihad Farman Khoso assisted the girl's family in the burial and provided ration bags to flood-affected families. Farman Khoso called on the district administration to help the flood-affected families and give them food immediately so that no more children die due to starvation. Locals have claimed that the child's death was gross negligence by officials and their inaction to the court directives. According to locals, the Sukkur bench of the Sindh High Court had ordered the officials to move people into camps and give them relief material.

The United Nations Secretary-General Antonio Guterres visited Sindh province to meet the flood-affected people on September 10. Guterres accompanied by Pakistan Prime Minister Shehbaz Sharif and Foreign Minister Bilawal Bhutto Zardari travelled to the Sukkur region of Sindh. He has termed the flood situation in Pakistan as "climate carnage." Guterres further said, "I have simply no words to describe what I have seen today." He called for financial support for Pakistan and described it as a "matter of justice", stating that the nation is "paying the price of something that was created by others." Guterres also expressed gratitude to civil society, humanitarian organizations, and the UN teams who have come forward to help the people affected by the flood. According to the United Nations, more than 1,300 lives have died and tens of millions of people left homeless.

"I have seen many humanitarian disasters in the world, but I have never seen climate carnage on the scale of the floods here in Pakistan," UN Chief Antonio Guterres said.

Beyond the human suffering of the affected people in Pakistan, I have also seen great heights of heroism.

I thank the civil society, humanitarian organizations, and the UN teams who have rushed in, for their tireless work.

We stand in solidarity with the people of Pakistan. pic.twitter.com/eFzBoOecxo

I have never seen climate carnage on the scale of the floods here in Pakistan.

As our planet continues to warm, all countries will increasingly suffer losses and damage from climate beyond their capacity to adapt.

This is a global crisis. It demands a global response. pic.twitter.com/5nqcJIMoIA