Pakistan Government Website Blunders Out The Truth, Confirms That PoK Is A Part Of India

A map on the government website of Imran Khan-led Pakistan shows the illegally occupied Pakistan Occupied Kashmir (POK) as a part of India, in an embarrassment

Even as Pakistan Prime Minister Imran Khan continues to accuse India on trumped up charges whilst his country pushes terrorists into J&K in his continued attempts to attract international attention on Kashmir, a map on a government website of his country shows Pakistan Occupied Kashmir (PoK) as part of India, as it rightfully is.

Pakistan had illegally occupied parts of Jammu and Kashmir after Pathan tribesmen infiltrated Kashmir from the northwest frontier province back in 1947. India has maintained that PoK is an integral part of India, with Home Minister Amit Shah announcing the same on the floor of the Parliament last year, since when there has been a significant amping up of the pressure on Pakistan. Moreover, CDS and former army chief General Bipin Rawat had said that the Indian army will take action to reclaim PoK if ordered to do so.

The map showing PoK as a part of India comes amid as Imran Khan-led country's continuous ceasefire violation along the Line of Control even as the world fights the deadly Coronavirus pandemic. It also comes as an admission that Pakistan has illegally occupied Indian territory.

READ | Twitter & Zoom throttled in Pakistan; VPN users accuse PM Imran Khan of being behind it 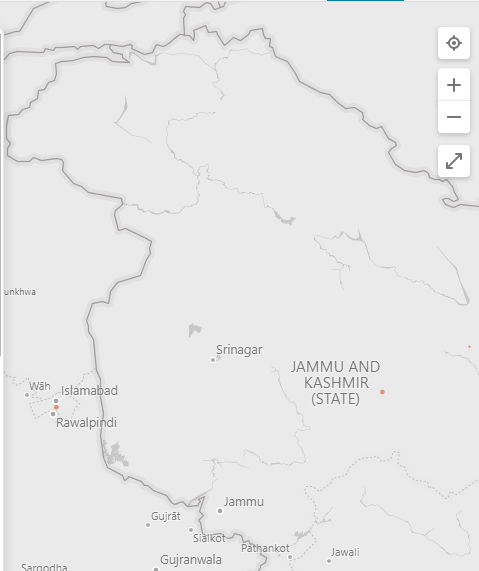 READ | Pakistani lawmaker baffles all; claims half of UK's population has Covid & brazens it out

In recent weeks, India has also starting operating a number of services that consider PoK and Gilgit Baltistan as its own territories, and has given Pakistan a cue that it must vacate all that it illegally holds. AIR and Doordarshan's weather reports now include PoK cities.

Meanwhile, Nepal issued a political map on Thursday showing Lipulekh, Kalapani and Limpiyadhura of India under its territory. Nepal's PM Oli said that Nepal will claim Limpiyadhura, Lipulekh, and Kalapanias through 'diplomatic efforts'. Earlier, the country's president Bidhya Bhandarialso said that these parts belong to Nepal and appropriate diplomatic measures will be adopted to resolve the existing issues with India.

As the new political map created commotion in New Delhi amid mounting tensions with China along the LAC, the Ministry of External Affairs slammed this "unilateral act". Maintaining that this move was not based on historical facts and evidence, MEA official spokesperson Anurag Srivastava observed that this was contrary to the understanding between the two countries to resolve boundary disputes through dialogue. He made it clear that India shall not accept such an "artificial enlargement" of territory. Thereafter, he urged the Nepal government to respect India's consistent position on this matter. Srivastava expressed hope that the Nepalese leadership would create a positive dialogue to resolve boundary issues.