Former Indian cricket skipper Sourav Ganguly on Thursday, October 3, termed Pakistan Prime Minister Imran Khan’s speech at the United Nations General Assembly Session as “rubbish” and expressed how this is not the cricketer the world knew of. Ganguly took to Twitter while replying to Virender Sehwag’s tweet in which he had shared a video of Imran Khan while taking a dig at him.

Ganguly replied to Sehwag's tweet and said that he was shocked by seeing the speech. Ganguly added that the world needs peace and Pakistan as a country needs it the most but despite that Imran Khan spoke such "rubbish". He even called Imran Khan's UN speech as "poor" and said that this is not the Imran Khan the cricketer world knew. 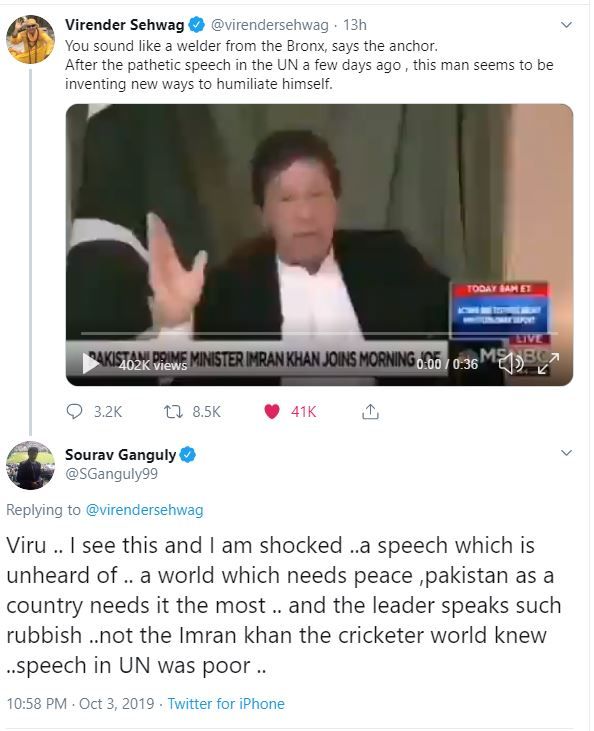 READ | PM Modi at UNGA: Working tirelessly to end use of single-use plastics

Earlier in the day, Virender Sehwag shared the video of the US anchor embarrassing Imran Khan and took to Twitter to share his thoughts. Labelling Imran Khan's speech in the UNGA as 'pathetic', Virender Sehwag said that Imran Khan was always finding ways to humiliate himself. The attack on the Pakistani PM comes after his address at the UN where he attempted to colour India's image in the global circle but failed to win over any support.

You sound like a welder from the Bronx, says the anchor.
After the pathetic speech in the UN a few days ago , this man seems to be inventing new ways to humiliate himself. pic.twitter.com/vOE4nWhKXI

In a direct attack to former cricketer and Pakistan Prime Minister Imran Khan, BJP MP & former Indian cricketer, Gautam Gambhir had said that Khan should be 'excommunicated' from the sports community. Taking to Twitter, the BJP MP said that Imran Khan's speech at United Nations General Assembly (UNGA) proved him to be a role model for terrorists. He also demanded Imran Khan's excommunication, explaining that sports personalities are role models of good behaviour and team spirit. However, he said, that Imran Khan is a role model for terrorists.

Sportspeople are supposed to be role models. Of good behavior. Of Team spirit. Of ethics. Of strength of character. Recently in the UN, we also saw a former sportsperson speak up. As a role model for terrorists. @ImranKhanPTI should be excommunicated from sports community.