The video was posted by Alzheimer's Society on Facebook on February 17 when Autumn and her grandfather can be seen singing has taken the internet by storm.

A video of an elderly man with Alzheimer's singing along with his granddaughter has taken the internet by storm. The video was posted by Alzheimer's Society on Facebook on February 17 when Autumn and her grandfather can be seen singing the song, “Somewhere over the rainbow”. The video has since then received over 138 thousand views and hundreds of comments with most people finding it “beautiful”. One of the Facebook users also said that it made him cry.

Autumn and grandpa Sonny, singing together

After her video received an overwhelm response, Autumn also said, "So overwhelmed with the amount of views this is getting. I told my pawpaw he’s Facebook famous."

According to the caption of the 2-minute long video, Autumn is a passionate singer she loves to sing with her “grandpa” who is currently living with Alzheimer's disease. Autumn's mother, Aimee said that her daughter sings to the grandfather several times a week and they have a “special bond”. The video has amazed many with most people recalling how someone in their family lives with the same disease and music is “very helpful”. Most netizens were seen getting emotional on how both the individuals just look at each other and sing the song.

A Facebook user wrote, “So beautiful, Autumn. My eyes are leaking!!!!”

Another user wrote, “ I am a caregiver for elderly with autism and this touched my heart! I would love to see a video of you singing Jay Allen's song Blank Stares to your pawpaw please.”

An internet user said, “So incredibly beautiful and touching. You honour your grandfather and your family by being such a kind-hearted caring girl. God bless you.”

Read - China Approves Drug To Cure Alzheimer's; To Go On Sale From Next Month 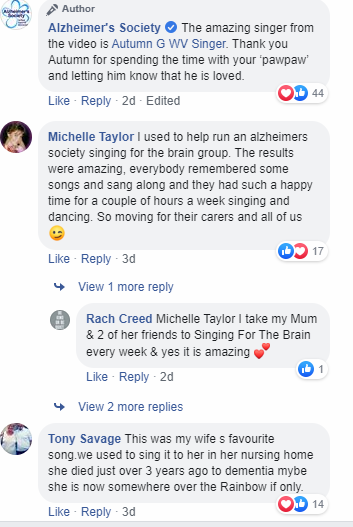 While medicine to cure Alzheimer's was being discovered for several years, Chinese authorities have approved a drug extracted from seaweed for the treatment of Alzheimer's disease on November 4. A drug named Oligomannate is also the first new medicine with the potential to treat cognitive disorder in the last 17 years. According to the National Medical Products Administration, the new drug has been given a green signal for mild to moderate Alzheimer's disease and for improving the cognitive function in the body. The approval, however, is reportedly conditional, which means Oligomannate can go on sale during the additional clinical trials.

Read - WATCH: Did You Know That Dementia And Alzheimer’s Are Not The Same?