At G7, Macron Warns Biden About UAE & Saudi Being At 'maximum Capacity' Amidst Oil Crisis

A video of a private conversation between Joe Biden and Emmanuel Macron has emerged when French President expressed doubts over UAE & Saudi's oil capacity. 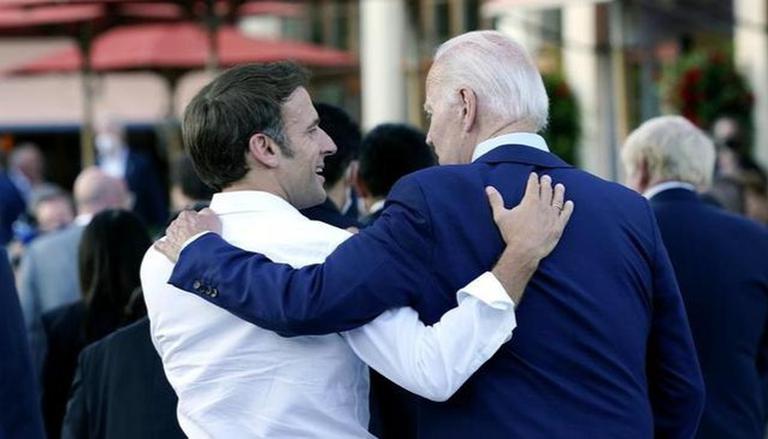 
A video of a private conversation between US President Joe Biden and his French counterpart Emmanuel Macron has spread like wildfire on social media in which the latter expressed doubts over UAE and Saudi Arabia’s oil capacity. Amid the ongoing Russia-Ukraine war, as Europe has decided to move away from Russian energy imports and battling to find other sources to fulfil its requirements, Macron caught Biden during the G7 summit in Germany to express doubts UAE increasing its crude oil production.

In the clip posted on Twitter, the French President approached Biden on the sidelines of the summit and he appeared to tell the American leader about Macron’s conversation with UAE leader Sheikh Mohammed bin Zayed Al Nahyan, who was referred to as ‘MBZ’. Macron told Biden that MBZ had informed him about Abu Dhabi and Riyadh not being in a position to substantially increase oil production.

"Second, the Saudis can increase a little bit, by 150 [thousands of barrels per day] or a little bit more, but they don't have huge capacities at least before six months' time."

Both Saudi Arabia and UAE were viewed as the only two nations in the Organization of the Petroleum Exporting Countries (OPEC) with spare capacity to boost global deliveries which could eventually stem the surge in prices. During this conversation between Macron and Biden, White House National Security Jake Sullivan interrupted the leaders and said, “Careful. Maybe we should just step inside … because of the cameras”.

Macron to Biden: "MBZ told me UAE is at maximum, maximum oil producing capacity, the Saudis can increase by 150,000 bpd after 6 months." pic.twitter.com/98MhjL7GG7

What does it mean for Biden?

The caution means that Biden’s visit to Saudi Arabia scheduled to take place next month may fail to woo the oil-rich Arab countries to help and reduce the spike in gas prices linked to the Russia-Ukraine war rich has lasted for over four months now. Public approval of Joe Biden has suffered a blow due to high gas prices of about $5 per gallon which is further contributing to the worst inflation since 1981. US President has previously called the increase in energy prices “Putin’s price hike”, but Americans are more inclined towards blaming Biden for the surge in cost, a poll has already revealed.

READ | UK PM, Macron to ramp up military aid for Ukraine to 'turn the tide' in Moscow-Kyiv war