After testing positive for COVID-19 thrice, Brazil President Jair Bolsonaro announced on Facebook on July 25 that he has tested negative for novel coronavirus.

After testing positive for COVID-19 thrice, Brazil President Jair Bolsonaro announced on Facebook on July 25 that he has tested negative for the novel coronavirus. Posting an image on the social media platform while promoting what appears to be a box of hydroxychloroquine medicines with a smile and a thumbs-up sign, Bolsonaro said “Good Morning everyone”. However, the Brazilian President did not mention when the new test was carried out as he had tested positive for SARS-CoV-2 for the third time on July 22.

Bolsonaro has been hailing the anti-viral drug for the treatment of COVID-19 despite the repeated warnings from the medics who have said it is non-beneficial. Even though Bolsonaro continued to greet his supporters while being isolated at his residence, now that he has tested negative of COVID-19, he is expected to resume his presidential duties and mingle with the crowd. 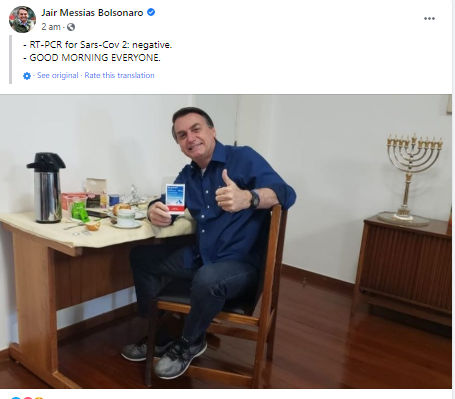 Recently Brazil President Jair Bolsonaro not only took a walk on the grounds of his residence on but also greeted the supporters. The video was broadcasted live on Bolsonaro’s official Facebook page where he can be seen wearing a mask. However, the COVID-19 positive president of the country addressed the crowd, that was consistently not socially distanced, by slightly lowering the mask off his face and only separated by a small water canon.

Moreover, in the same interaction with the crowd, Jair Bolsonaro raised a small box which appeared to be medicine and showing it to his supporters. During the coronavirus outbreak, while most health experts have warned against the usage of anti-viral drug hydroxychloroquine, Brazil President has not only allowed its treatment on pregnant women and children infected with COVID-19 but has also said that he has taken its doses since contracting the disease earlier this month.

However, Bolsonaro promoting the medicines came just a day after the Brazilian Society of Infectious Disease issued a report for medical professionals to halt the use of the drug on COVID-19 patients. Recently on July 23, the Brazilian President was photographed without a mask while talking to some sweepers in the garden of his presidential residence. Meanwhile, the COVID-19 cases in the Latin American nation continue to spike. As per Johns Hopkins University tally, the coronavirus cases in Brazil have crossed 2.2 million with at least 85,238  deaths.