Canada Witnesses '12,000 Lightning Strikes In A Day' As Wildfires Continue To Spread

Canada's military was on standby on Saturday to help evacuate towns and fight more than 170 wildfires fuelled by a heat wave and tinder-dry conditions. 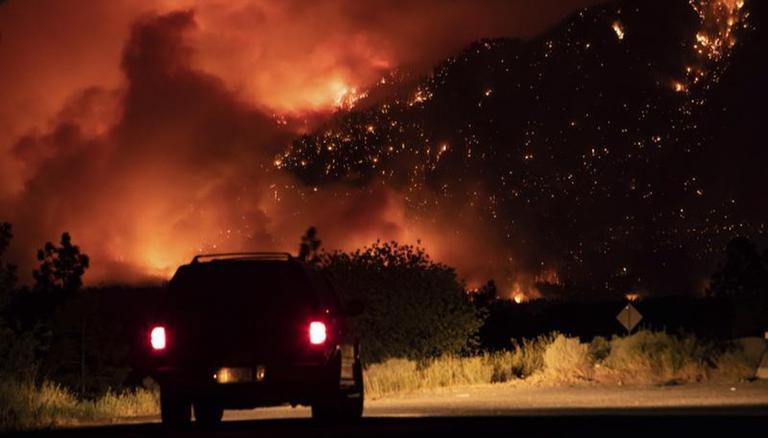 
Canadian military was on standby on Saturday to help evacuate towns and fight more than 170 wildfires fuelled by a record smashing heat wave and tinder dry conditions in the country. As the mercury touched 49 Celsius in western parts of the country, acres of land and settlements were engulfed by blazes. An village-Lytton- was burnt down in British Columbia resulting in the evacuation of more than 1000 people.

According to officials, as many as 174 fires were currently burning across the Province of British Columbia, 78 out of which were sparked in the last two days, officials said. Another region that were charred include north of the city of Kamloops, located 350 kilometers northeast of Vancouver. Most of the fires were caused by intense lightning strikes. “We saw 12,000 lightning strikes, roughly, yesterday," Cliff Chapman, the director of provincial operations for British Columbia Wildfire Service told CBC adding that many of the strikes hit near the communities.

🔥🌩️ The #pyrocumulonimbus yesterday with the wildfires & smoke in #BritishColumbia was so intense that some of it had overshooting tops and above-anvil cirrus plumes like is typical with severe thunderstorms pic.twitter.com/w2elhZ6rtj Meanwhile, Prime Minister Justin Trudeau met Friday with an incident response group that included several ministers, after earlier speaking with local, provincial and indigenous leaders. "We will be there to help," he told reporters. Later, Defese Ministry Harjit Sajjan confirmed that they would an operations center in Edmonton, with up to 350 military personnel providing logistical support to the region. He also said that military helicopters would be deployed for the purpose.

Update from Minister @BillBlair and @HarjitSajjan: In response to a request for assistance, we’re deploying air support from the @CanadianForces. We’ll continue to do everything we can to keep British Columbians safe from the wildfires that are burning across the province. https://t.co/8Xo9As9aQP

📍British Columbia: Our @CanadianForces are deploying air support to help British Columbians as they fight wildfires. We'll always be there for Canadians in their time of need. https://t.co/9DS64xO3j4

As the climate changes + more extreme weather affects communities across 🇨🇦, we will always be there to keep Canadians safe. We have approved a request for assistance from @yukongov to help communities impacted by or at risk of flooding in the Southern Lakes area of the territory

As the government in Ottawa warned of fires fuelled by record-breaking temperatures and issued evacuation orders, the Canadian military joined efforts with the firefighting service. The military forces prepared to tackle more than 174 active wildfires ravaging in suburbs of  British Columbia, and parts of the pacific northwest region, according to public broadcaster CBC.

Cautioning citizens about the "long and challenging summers” ahead, the director of provincial operations for the British Columbia Wildfire Service said that there were at least 12,000 lightning strikes, roughly, yesterday. And that, the high-pressure "heat dome" trapping warm air in the region was to be blamed for such dire conditions and scorching heatwave.