Owned by the Chinese Communist Party and known to be a CCP mouthpiece, China Daily shared a picture of a cow apparently 'resembling' ex-UK PM Boris Johnson. 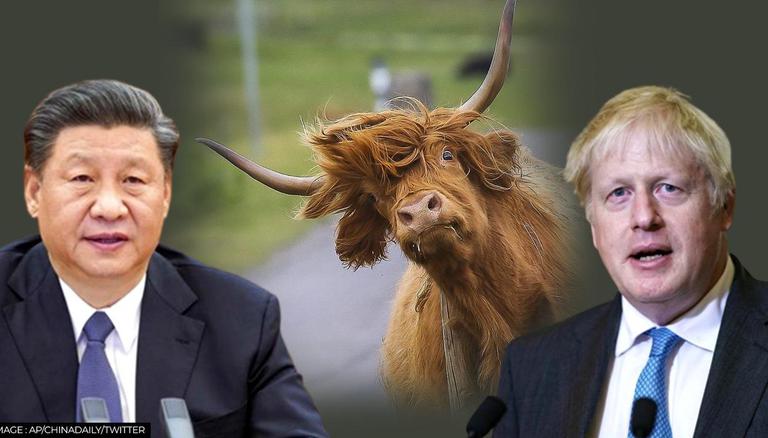 
In a rather bizarre incident, the vocal China critic, former UK PM Boris Johnson was compared to a wild highland cow for apparently exhibiting the same browny and messy hairstyle by Chinese state-affiliated media. Owned by the China's Communist Party and known to be a CCP mouthpiece, China Daily appeared to troll the former British PM by sharing a picture of a cow that seems to be "pulling a face while flicking its hair" for the camera on the Isle of Mull, Scotland.

It is to mention that the Communist Party of China constitutionally administers the nation under a single-party system and owns several media outlets. Remarkably, Twitter flags China Daily and others as Chinese state-affiliated media.

As the post by Chinese Daily went viral, netizens also poured their views and opined that the bull is looking exactly like the former UK Premier. Some netizens have even claimed the nose and the eyes are also looking similar to Johson. "The nose and the eyes have it. Apparently #BorisJohnson on Mull.

Boris Johnson in the Highlands? A wild highland cow seems to be pulling a face while flicking its hair for the camera on the Isle of Mull, Scotland. #OneMoment pic.twitter.com/OmYgtEuZzf

Boris does not use shampoo, revealed ex-UK PM

It was not the first time for the media mogul in the UK to become a Prime Minister and face public flak due to his messy hairstyle. On several occasions, he faced an outcry including during his interview with a UK-based publication The Guardian in 2014.

When the host asked him about his craziest hairstyle, he said his hair does not demand much care and added there are more pressing concerns than putting his hair in the right place.

"It is hair that asks you not to take it seriously and, simultaneously, it manages to be hair which implies there are more pressing concerns in this world than trifling matters of follicular vanity. It is hair that says: why should I waste time with a brush when I have the world to run?" he said.

When the host asked about the shampoo he uses while taking a shower, Johnson replied humorously and said he does not use any cleaner for his hair and added he uses whatever he finds in the bathroom.

"No, I don’t! I’m now so short-sighted, I’m blind!” My eyes used to be fantastic, but now I cannot actually… There was something in the shower this morning that I used, I cannot honestly tell you what it was. It might have been acne cream.  It might have been toothpaste. I honestly couldn’t see, but I put it on and it seemed to work," replied UK PM.