"COP26 outcome is a compromise, reflecting the interests, contradictions and state of political will in the world today," UN chief Antonio Guterres said. 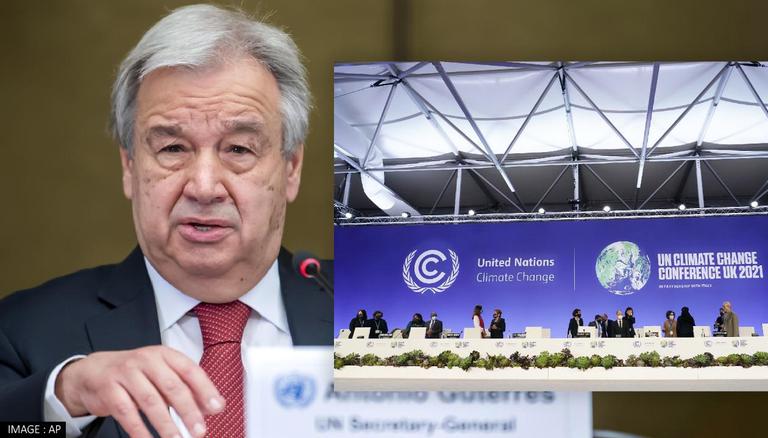 
United Nations Secretary-General Antonio Guterres remarked on November 13 that the outcome of negotiations that took place at the COP26 Climate Summit in Glasgow was "not enough". During the closing event of the UN Climate Change Conference, Guterres stated that the outcomes of the summit which have been accepted were a compromise.

The #COP26 outcome is a compromise, reflecting the interests, contradictions & state of political will in the world today.

It's an important step, but it's not enough.
It's time to go into emergency mode.

The climate battle is the fight of our lives & that fight must be won. pic.twitter.com/NluZWgOJ9p

'45% Carbon emission reduction by 2030 should be top objective': Antonio Guterres

Guterres went on to explain that according to science, the top objective for this decade should be quick, substantial, and a long-term promise for carbon reduction by 45% within 2030 in comparison to 2010 levels to avoid severe climatic catastrophic disasters. He added that even if these are implemented fully, the current set of Nationally Determined Contributions would still elevate emissions this decade, putting everyone on a road that will clearly lead to 2 degrees Celsius above relative to pre-industrial levels by the end of the century.

READ | COP26: New draft declaration retreats from prior call to phase out coal & fossil fuel use

Furthermore, the UN chief complimented the US-China deal, signed at the COP26 summit, in which the two countries committed to increasing carbon reductions by the end of this decade. He even noted that to support many developing nations with carbon emission reduction, alliances of developed nations, financial institutions, and technical expertise are needed to be established.

Indicating to help the emerging nations, Guterres added that this step is important in assisting each of those growing countries in making the shift away from coal to a much greener economy.

Meanwhile, the UN Secretary-General asserted, "We have another climate crisis today. A climate of mistrust is enveloping our globe” and added that to overcome this climate action is needed which can aid in the restoration of confidence and credibility. This will involve delivering on the $100 billion pledge to poor or developing nations for climate funding, the UN chief said.

Guterres explained that this will entail tracking progress, revising climate plans on a yearly basis, and increasing ambition. He said that it consists of developing explicit criteria to evaluate and analyse net-zero pledges by non-state entities, in addition to the procedures already outlined in the Paris Agreement.

Antonio Guterres claimed that the COP26 climate summit laid the groundwork for change, citing pledges to eliminate deforestation, substantially decrease methane emissions, and mobilise private capital to support net-zero emissions. The agreements which have been approved in the COP26 reaffirm commitment to the 1.5-degree target, increase climate funding for adaptation, and emphasise the importance of bolstering support for vulnerable nations facing irreversible climate harm.

The UN chief explained that the agreement also urges, for the first time, foreign financial institutions to incorporate climate risks in concessional financial as well as other kinds of support, such as Special Drawing Rights.