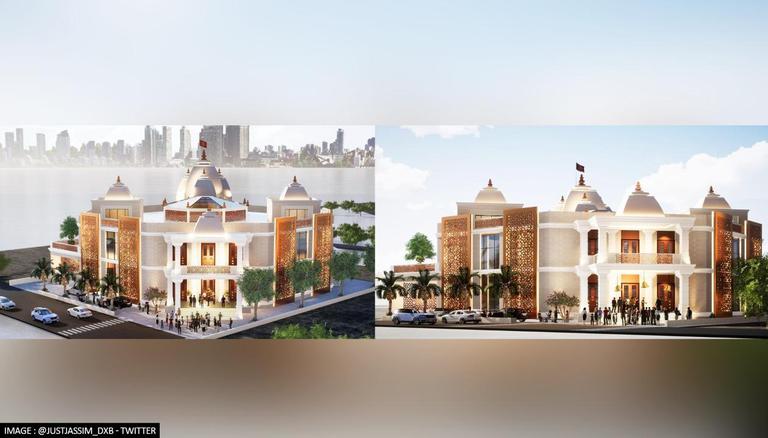 
The construction of a Hindu Temple at Dubai's Jebel Ali is 50% complete and will reportedly be open to the public by Dussehra next year. "Today, almost 52% of the construction has been completed," Raju Shroff, an Indian businessman and one of the trustees of the Sindhi Guru Darbar Temple was quoted by Khaleej Times as saying."The columns on the facade and interior were inspired by the traditional columns of the Somnath Temple in Gujarat, India. The main Shikhar dome is inspired by the Nagara style of the Hindu temple architecture found predominantly in North India," he added.

As per Dubai's local media outlets, the temple is being constructed adjacent to the Guru Nanak Darbar in Jebel Ali, which makes the area a multi-religious locality. In February 2018, Prime Minister Narendra Modi "witnessed laying of the foundation stone for the BAPS Swaminarayan temple on Abu Dhabi-Dubai highway,” the Khaleej Times reported informing that the first Hindu temple in Abu Dhabi, "being built on a generous gift of land by the Crown Prince of Abu Dhabi", reflects the UAE's commitment to tolerance and harmony. The temple’s interior, and its columns on the facade have been inspired by the traditional columns of the Somnath Temple in Gujarat, India. Meanwhile, the Shikhar dome is inspired by the Nagara style of the Hindu temple architecture found predominantly in North India, the businessman informed.

First look of Dubai's first Hindu temple in Jebel Ali.
It is set to be opened by Diwali 2022.
Jay Shri Ram🙏🏼@LostTemple7 pic.twitter.com/wv2cgMIgz9

The holy site will house an estimated 11 Hindu deities and would cater to the religious beliefs of Hindu communities hailing from India and other countries. The construction of the new Hindu temple has been speeding up to meet its May 2022 target, according to reports, and will be the second of two new Hindu temples coming up in the UAE, including a BAPS Hindu Mandir in Abu Dhabi. The land for the temple that is expected to host at least 1,500 worshippers was allotted by the Dubai Government last year, 2020. The structure's spire is believed to rise to a height of 24 metres. The temple's octagonal-shaped glass-shaded skylight is ringed with six additional spires. A 465-square-metre prayer room will be constructed on the terrace for pujas, inspired by the mashrabiya designs. Devotees will be able to pray around a fire once the structure is ready. "This is not one of your classical temples. It is a contemporary, modern-day temple," Shroff, a trustee of the Sindhi Guru Darbar temple overseeing the construction work was quoted by The National as saying.