President of Afghanistan, Hamid Karzai, called on leaders of Islamic Tehreek-e-Taliban (TTP) to ban airstrikes, cease their violence and resort to dialogue. 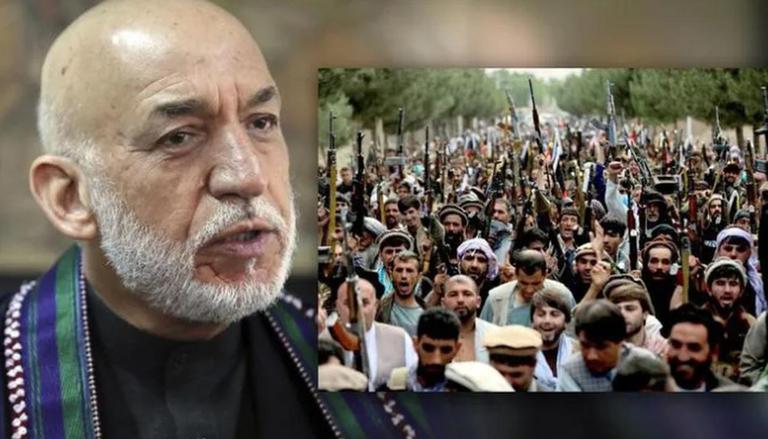 
Amid the ongoing tussle between the anti-Taliban resistance front and hardline Islamic fundamentalist groups, former President of Afghanistan, Hamid Karzai, called on leaders of Islamic Tehreek-e-Taliban (TTP) to ban airstrikes, cease their violence, and resort to dialogue.

The former Afghan head of state has urged all contesting sides of the war-ravaged country to prevent any further bloodshed of the innocent Afghans. This holds relevance as Hamid Karzai has been negotiating with the Taliban along with Dr Abdullah.

"Former President Hamid Karzai called the action of the leadership of the Islamic Tehreek-e-Taliban (TTP) to ban airstrikes, which cause physical and mental insecurity for our people, especially children, a good step and expressed hope that such acts will be prevented from being repeated so that our dear people are safe. And live in peace." 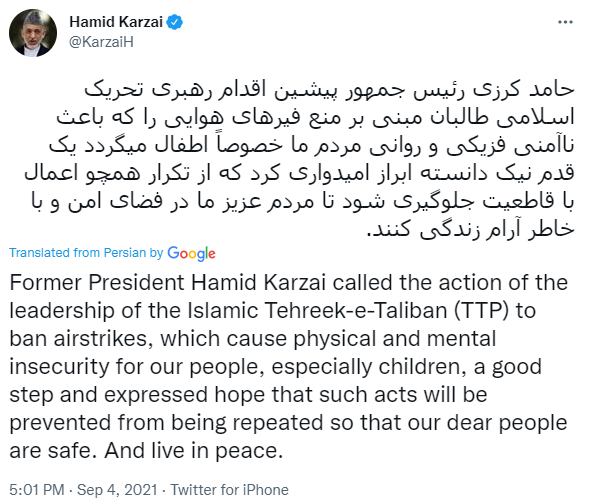 Hamid Karzai calls for the Panjshir battle to end

On September 3, ex-Afghan President had called on the North Alliance-led Afghan Resistance and the Taliban in Panjshir Valley to end 'military fighting and operations' and not 'refresh wounds'.

"Unfortunately, in recent days, despite the efforts of the reformers, military operations and fighting have started in Panjshir, which is a matter of deep concern and I do not consider the consequences to be in the interest of the country and the people. That is why I call on both sides that war is not only a solution but a wounded and suffering Afghanistan."

"Refreshes wounds and gives rise to discomfort. I hope that both sides will resolve the current issue through dialogue so that our afflicted people can enjoy complete peace and happiness."

While Karzai's intention appears to be a noble one, his own current alignment remains unclear. There have been talks of the Taliban offering Ahmad Massoud a position in any government it forms. It is unknown if similar offers have been made to Karzai or Abdullah, who is effectively under house arrest. However, western media has speculated that Karzai and Abdullah could take the wind out of the Afghan Resistance's sails if they reach an agreement with the Taliban.

Former Afghanistan President urges all sides to maintain peace and security in the war-torn nation as the Taliban terrorists are surrounded in the Dasht-e-Rivet area. The Taliban is still in control of the Paryan district in Panjshir province, but their hind path has been cut off from Kotal Khawak. The clash pertains to the Resistance Forces' attacks, blowing up a mountain in the area of the Danah. Thousands of Taliban terrorists in Panjshir region have been trapped inside the valley.