On searching the capital of 'Khalistan' on Google, it comes up with the word, 'Lahore', which is actually the capital of the Punjab province in Pakistan.

While most people are seen blindly trusting the results of the internet search engine, Google, it has recently thrown an interesting search. On searching the capital of 'Khalistan', Google comes up with the word, 'Lahore', which is actually the capital of Punjab province in Pakistan. The result is also accompanied by the Sikh symbol of 'Khanda' in black on blue and yellow background. This result is more ironical because Pakistan has been denying its support for the 'Khalistan movement'. It is a Sikh nationalist movement to create a separate country for Sikhs called 'Khalistan' or 'The Land of Khalsa' in the Punjab region. The Google search result was posted on Twitter by internet users, and since then netizens have not stopped reacting to it. 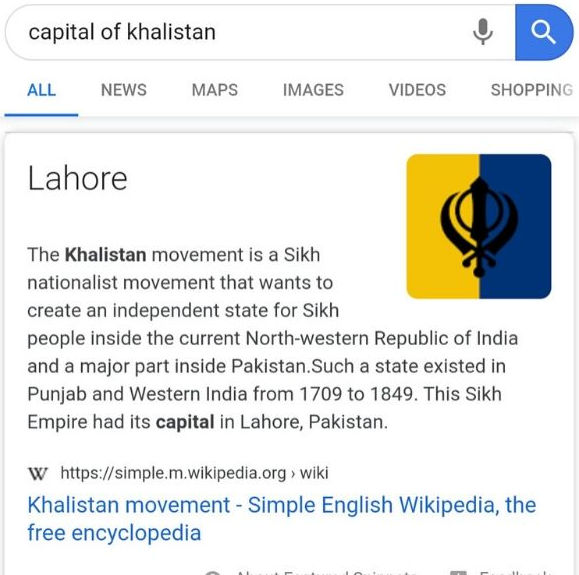 Look for the capital of ''#Khalistan'' and Google comes up with word ''#Lahore'', which is the capital of #Panjab province of #Pakistan.
The results also highlight Sikh insignia ''Khanda'' on blue and yellow background. pic.twitter.com/HIM6bIrkxJ

Google "Khalistan Capital" and find Lahore as the answer. @ImranKhanPTI can you take this? pic.twitter.com/pOA5uuMtr8

Google takes down a pro-Khalistani app

Google accepted India’s demand to take down a pro-Khalistani mobile application from its Play Store on November 19. The app had asked the general public to register themselves to vote in the so-called ‘PUNJAB REFERENDUM 2020 KHALISTAN’. A website was also launched on those lines for the same purpose. During the analysis of the app as well as the website in the DITAC Lab, Punjab, it was found that the data of voters registered through it was also linked and stored in the webserver of the website, created and handled by ‘Sikhs For Justice’ (SFJ), an Association banned by the Government of India.