To celebrate India’s historic 75 years of Independence, the Indian Flag was unfurled around 30 kilometres above the Earth by Space Kidz India. Watch 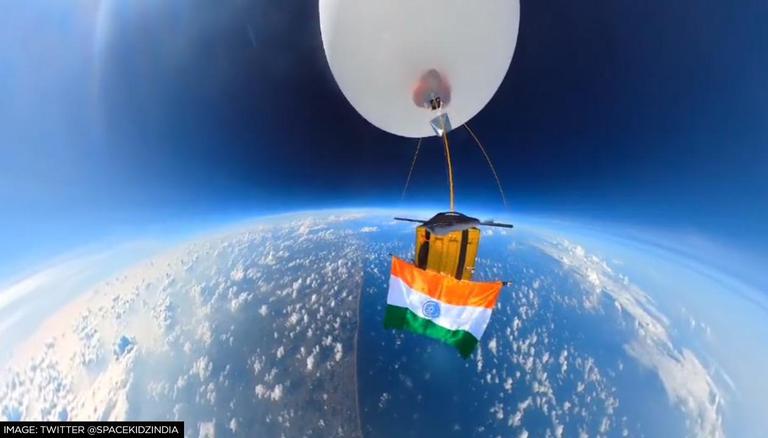 
To celebrate India’s 75th Independence Day, the Indian Flag was unfurled around 30 kilometres above the Earth. As part of the 'Har Ghar Tiranga' initiative underneath the Indian government's Azadi ka Amrit Mahotsav campaign, Space Kidz India sent the Tricolour high above the planet with a help of a ‘special balloon’. Space Kidz India is an aerospace organisation that grooms young scientists for the nation and spreads awareness among children for a borderless world.

Observing the spirit of the day, the company noted in a statement that the raising of the flag above the planet "is a mark of respect and tribute to all the freedom fighters and pride to people who are struggling hard to make India Proud every day”.

Besides this, Raja Chari, an Indian-American NASA astronaut, posted a photograph of the Indian flag placed on one of the International Space Station's cupola windows. On India's 75th Independence Day, the astronaut thanked the Indian diaspora on Twitter and highlighted the achievements made by Indians across the world, including in NASA. Given that Hyderabad is the hometown of his immigrant father, he tweeted a photo of the city seen from the space station.

READ | Independence Day 2022: Here's how people across the nation celebrated 75 years of freedom

Chari said, “On Indian Independence eve I am reminded of the Indian diaspora that I could see from the space station where my immigrant father’s hometown... shines bright". He added, "NASA is just 1 place Indian Americans make a difference every day. Looking forward to @IndianEmbassyUS celebration".

On Indian Independence eve I’m reminded of Indian diaspora that I could see from @Space_Station where my immigrant father’s home town of Hyderabad shines bright. @nasa is just 1 place Indian Americans make a difference every day. Looking forward to @IndianEmbassyUS celebration pic.twitter.com/4eXWHd49q6

Furthermore, Samantha Christoforetti, an Italian astronaut, also sent greetings to India in advance of August 15 on behalf of NASA, the European Space Agency (ESA), as well as other international organisations. In a video that the Indian Space Research Organisation (ISRO) posted, Christoforetti said, “Greetings from the International Space Station. It is a pleasure to congratulate India on 75 years of Independence".

Answering Christoforetti’s heartfelt message, ISRO expressed gratitude to all the space station partners as it wrote, "Thank you NASA, ESA, and all the partners of the International Space Station for the wishes on Azadi Ka Amrit Mahotsav".

Thank you @NASA, @esa, and all the partners of the International Space Station👋 @Space_Station for the wishes on #AzadiKaAmritMahotsav 🇮🇳 pic.twitter.com/2r0xuwdSQ4