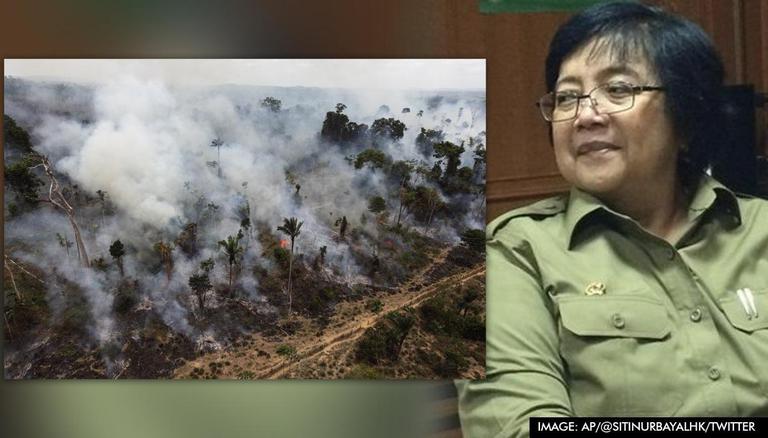 
Indonesia has recently voiced criticism over the COP26 deal to eliminate deforestation by the year 2030, just after signing the agreement with over 100 other nations. During the climate summit in Glasgow this week, countries agreed on a multibillion-dollar proposal to end industrial-scale forest cutting in less than a decade. However, Minister of Environment and Forestry of Indonesia, Siti Nurbaya Bakar, said on Wednesday that "forcing Indonesia to zero deforestation in 2030 is clearly inappropriate and unfair," the Guardian reported.

Furthermore, as per BBC, Bakar stated that the government could not "promise what we can't do". Even though during the summit the Indonesian President Joko Widodo has signed the forest deal, yet she stated that development will remain Indonesia's top goal.

'No agreement could stop economic progress'

Environment Minister Bakar went on to say that deforestation could be described in a variety of ways and that no agreement could stop economic progress. Huge developmental initiatives have been taken by the President and this must not be halted in the name of carbon emissions or deforestation, she added.

The south-east Asian archipelago, Indonesia comprises nearly the world’s third-biggest rainforest, quoting Bakar, the Guardian reported, “Indonesia’s natural wealth, including forests, must be managed for its use according to sustainable principles, besides being fair.” In addition, Mahendra Siregar, Indonesia's deputy foreign affairs minister, stated that the agreement of the zero-deforestation commitment is “false and misleading”, as per BBC.

Forest deal yo end deforestation by 2030

According to the Guardian, the deal which was signed by Indonesia and other countries stated that the leaders pledged “to work collectively to halt and reverse forest loss and land degradation by 2030 while delivering sustainable development and promoting an inclusive rural transformation”. The deal has almost £14 billion which is nearly $19.2 billion in public and private money to invest in saving forests.

Meanwhile, Experts have praised the initiative and warned that the pledges should be kept, according to the BBC, after notifying against a previous deal inked in 2014, which had failed to decrease deforestation. Chopping down trees reduces forests, which leads to climate shifts since they are unable to absorb huge amounts of the global warming gas CO2.  Further, Prime Minister of the United Kingdom Boris Johnson has described the accord as a landmark agreement to safeguard and regenerate the Earth's forests.

As per the Global Forest Watch, a tracking website, in the year 2001, the country possessed roughly 94 million hectares of forest area -- classified as tropical forest -- which has not been totally chopped, yet, by 2020, that area has reduced by at least 10%..