Gaza explosion was captured on Instagram live hosted by comedian Maya Hussein based out of London and while she was discussing the situation in Gaza. 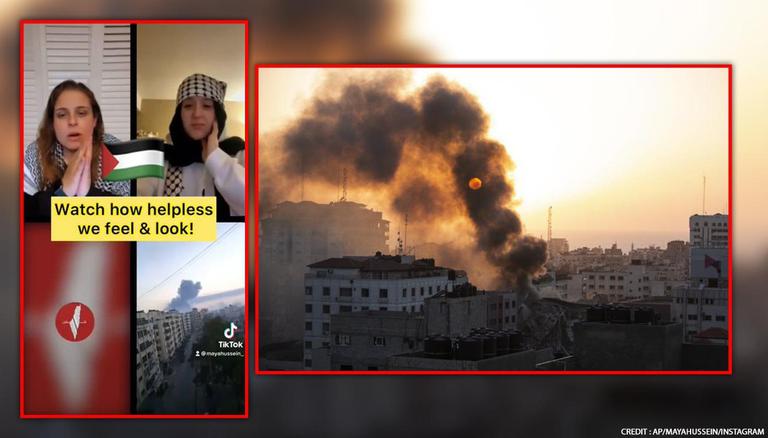 
As the Israel-Palestine conflict continues to escalate, both sides have been engaging in violent attacks with Palestinians launching rockets from Gaza and Israel unleashing new airstrikes. The Israeli strikes have led to heavy casualty on the other side and as many as 25 people were killed overnight and hundreds were left injured. As violent exchange continues between both sides, a video of an explosion in Gaza was captured live on social media and has since gone viral.

The video is from an Instagram live hosted by London-based comedian Maya Hussein and while she was discussing the situation in Gaza, an explosion sent shock waves across the social media. The video showed four people who were discussing the ongoing violence while a loud noise sent trembles around. The explosion took place right beside the house of one of the participants of the live chat.

Sharing the video she said, “Wake up everyone! Explosions are happening in Gaza! Our people in Palestine are not safe! They are not sleeping! They need our help! Please share this with everyone! We need to stick together!"

Another video shared by the comedian showed a plummet of smoke as building were rattled by the strikes from Israel. Residents in Gaza fear for their lives as Israeli strikes completely destroyed a 13-storey building last night. Both sides continue to engage in strikes as Israeli PM vowed more attacks to bring 'total, long-term quiet' before any truce.

As Israel continued airstrikes on Gaza, as many as 10 senior Hamas military figures were killed and a pair of high-rise towers housing Hamas facilities were destroyed, AP reported. In the latest escalation in Israel-Hamas fighting, at least 48 Palestinians have been killed in Gaza. With no endgame in sight, both sides have been engaging in violent exchanges in what is termed as 'heaviest aerial exchanges’ since 2014 War.

Israel carried out hundreds of airstrikes in Gaza into Wednesday morning, as Hamas and other Palestinian militants fired multiple rocket barrages at Tel Aviv and Beersheba. Approximately 130 rockets were fired by Gaza militants that hit Tel Aviv forcing Israel's main international airport, Ben Gurion, to close. Meanwhile, US Secretary of State Antony Blinken has expressed concern about “what we’re seeing in Israel, West Bank and Gaza” but has also reportedly backed Israel’s right to protect itself.

What led to Israel-Palestine clashes?

Earlier last month, a slew of planned protests broke out in Israel after locals took to the streets demanding more Jewish settlements in east Jerusalem. During the protests, Hamas' flags were raised inside the Al Aqsa Mosque, the third most holy site for people of the Islam faith. As police tried to control the crowds, violence broke out and tear gas was fired injuring several protestors. With alleged use of excessive use, the mosque was evacuated and demonstrators were arrested. As a retaliation to the evacuation, Hamas fired over 150 missiles and Israel retaliated effectively.

While there have been losses on both sides, the majority of the casualties have been on the Palestinian side, and the dead include both combatants and civilians. Gazans reported their homes shaking and the sky lighting up with Israeli attacks, outgoing rockets and Israeli air defence missiles intercepting them. World leaders have been asking both sides to show restraint and avoid violence but the Israeli PM vowed more attacks to bring 'total, long-term quiet' before any truce.