The Israel Antiques Authority informed that a scuba diver discovered a 900-year-old sword along with other antiquities dating back to the Crusader period. 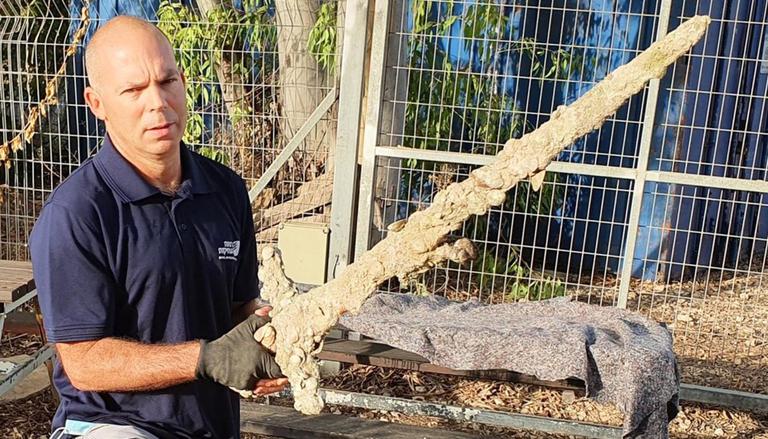 
On Monday, the Israel Antiquities Authority (IAA) informed that a scuba diver discovered a 900-year-old sword along with other antiquities dating back to the Crusader period off the coast of Carmel beach in northern Israel. Shlomi Katzin, a resident of Atlit, handed over the antique sword to the Israel Antiques Authority and received a certificate of good citizenship in return. The Times of Israel reported that according to the IAA, Katzin discovered the sword during a recent dive in an area off the shore where waves and undercurrents had reportedly displaced sand, uncovering the artefact. Katzin found the sword, which was encrusted with sand, small stones and shells, while looking for stones and metal anchors. The sword has a 30-centimetre hilt and a one-meter blade.

IAA Robbery Prevention Unit's Inspector, Nir Distelfeld claimed that the sword is made of iron and is a spectacular and rare treasure that clearly belonged to a Crusader knight. Katzin bought the sword ashore and took it to the Robbery Prevention Unit's northern district office, fearing that others would locate it before IAA inspectors had a chance to examine it. "We will ensure that the sword is exhibited to the public once it has been cleaned and researched in the laboratories of the Israel Antiquities Authority," IAA general director Eli Escosido was quoted as saying by the media outlet. Throughout decades of shipping activity along the coast, the Carmel beach with its many natural bays provided protection to ships during storms, stated Antiquities Authority Marine Archaeology Unit's director Kobi Sharvit.

'The sword was first noticed in June'

The IAA has been monitoring the site where the sword was first noticed in the month of June. According to the IAA, the site contains archaeologically significant artefacts and it was utilised as a natural anchorage place as early as 4,000 years ago, and the sword suggests it was still in use 900 years ago, reported The Times of Israel. Meanwhile, earlier this month, Israeli archaeologists discovered a unique old toilet going back almost 2,700 years, when such facilities of privacy were a luxury in the holy city of Jerusalem. The smooth, carved limestone toilet was discovered in a rectangular cottage that was part of a huge mansion overlooking what is now the Old City, stated the Israeli Antiquities Authority as reported by The Associated Press (AP).