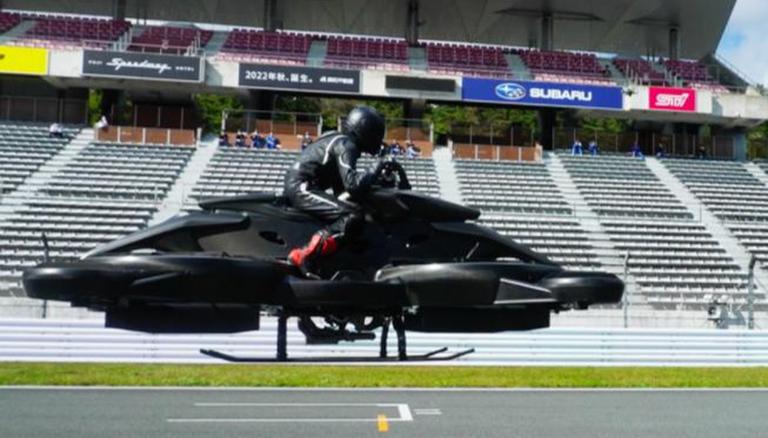 
A Japan-based drone startup backed by popular soccer player Keisuke Honda on Wednesday, October 27 unveiled the world's first "flying bike" or “Hoverbike” that was seen floating above ground like a drone. The futuristic vehicle was released on 26 October and was seen at the Fuji Speedway Racing Course race track in Shizuoka prefecture of Japan. It has been in the developmental phase for four years. About 3.7 meters long the bike has six propellers in the front and rear, and it floats while controlling the rotation with a motor, according to the company release on October 27. Named as "XTurismo Limited Edition" manufactured by A.L.I. Technologies, the bike is equipped with a conventional engine and at least four battery-powered motors. 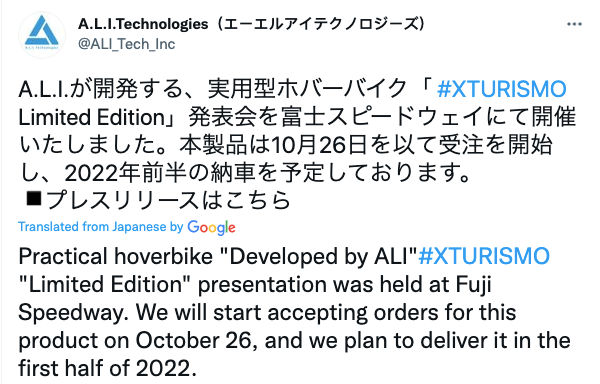 “We held a presentation of the motorcycle "XTURISMO Limited Edition". After the presentation by President Daisuke Katano, a manned driving performance was held at the Fuji Speedway Racing Course,” ALI Technologies Co., Ltd. said in a release. The company added that the hover bike is an air mobility that will “provide everyone with a new experience of traveling in space.”

Daisuke Katano, President and CEO, said, "We will enable emergency use of hoverbikes in the event of a disaster and at the same time promote the use of entertainment in peacetime. For social implementation, first of all, to formulate regulations. I feel the need to raise materials and "general recognition (social acceptability)". We will grow it as an industry that contributes to society. "

The hoverbike was seen flying about 3 meters on the spot, and it moved in the air at a speed of 30 km/hour. It is priced at 77.7 million yen (US$680,000) or US $680,000. It would be the first time that Japan will mass-produce and sell hoverbikes in an agreement with Yamanashi Prefecture startup and the so-called ‘flying bike’ available mainly for people who won the private property to able to fly it. The delivery of the hoverbike is expected to begin by spring of 2022, next year, and will only be allowed to be used for leisure since the legal system in Japan does not allow it to run on public roads as a transport.

The booking for the hoverbike XTurismo Limited Edition started on Tuesday, October 26, 2021. In the future, the manufacturing plans to work on the development of the flight management system "COSMOS" that manages applications and flight management for safe social implementation. “COSMOS" is a system for constructing an empty road and operating safely when flying and traveling by a large number of air mobility and drones, and is also used in NEDO's demonstration tests related to drones,” the firm informed.