Man Ignores A 5.5-inch 'dragon Horn', It Turns Out To Be Cancerous

Labourer ignored a patch on his skin until it grew into a five-inch what medics termed as 'Dragon horn.' He got it removed after it turned out to be cancerous.

A labourer in the UK ignored a crusty patch on his skin for three years until it grew into a five-inch what medics termed as 'Dragon horn.' He finally got it removed from his back after it turned out to be cancerous. After the treatment, the gaping hole left behind was reconstructed with a skin graft from his thigh.

The unidentified 50-year-old patient sought treatment for the cutaneous horn after it measured 5.5. inches in length and 2.4 inches in width. The test conducted during the treatment diagnosed him with a squamous cell carcinoma (SCC), a slow-growing and curable cancer. But medics at the Countess of Chester Hospital who removed the mass were stunned to discover the disease had not spread to other parts of his body, considering the fact he had never received treatment. 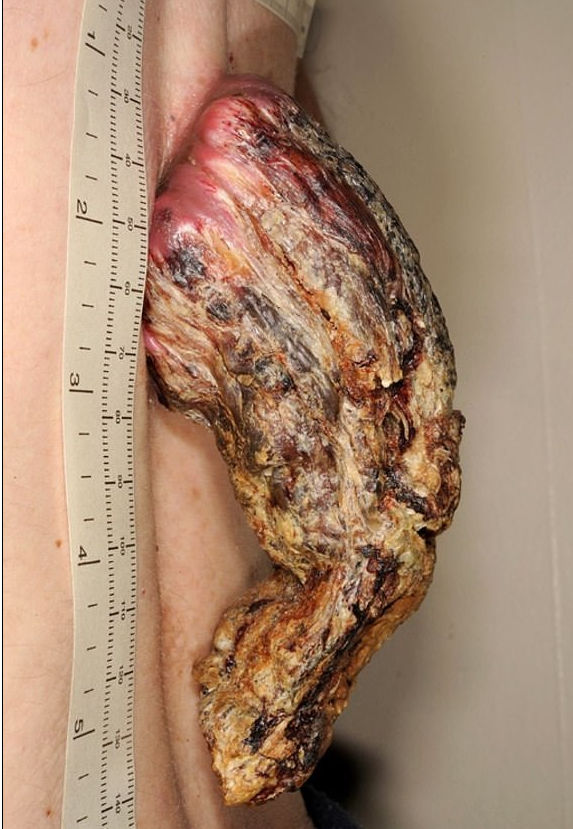 According to cancer research UK, most cases are diagnosed and treated early before becoming 'dragon horns.'  Doctors say these cases serve as a reminder that such patients can slip through the net even in countries with access to free medical care.
Writing in the British Medical Journal Case Reports, the team of doctors wrote: 'We report a rare case of an extremely large well-differentiated SCC that was neglected by a patient living in a developed country with access to free healthcare. This highlights that despite current public skin cancer awareness and rigorous healthcare measures, cases like this can still arise and slip through the net.'

Read: Health: Spices To Consumes To Keep Diseases Away From Your Heart

An SCC is a type of non-melanoma skin cancer (NMSC) caused by changes in the DNA cells, such as a burn. They rarely spread and are curable, according to Cancer Research UK. It is the second most common skin cancer in the UK, after melanoma, accounting for 23 per cent of all 100,000 NMSC cases diagnosed each year. They can vary in their appearance, but most appear as a scaly or crusty raised area of skin which may be red and inflamed. They can be sore or tender and they can bleed in some cases. Most cases are diagnosed and treated early before becoming dragon horns. SCC can occur on any part of the body, but they are more common on sun-exposed sites such as the head, ears, neck and back of the hands.